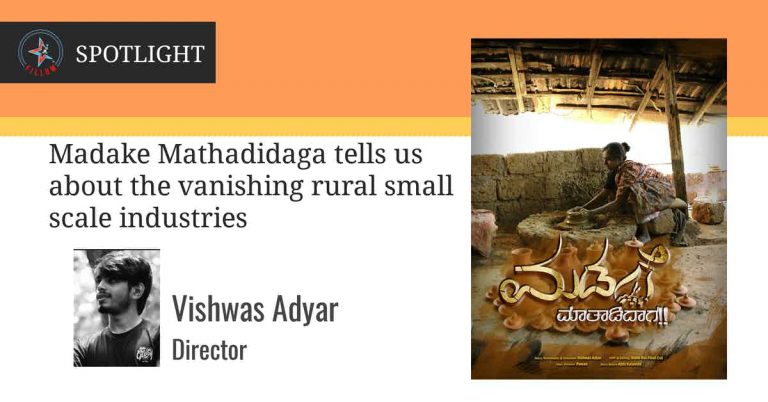 Vishwas Adyar talks with great enthusiasm about his film Madake Mathadidaga. The ride of making this film wasn’t easy he adds, but the director had a message to convey to the world about the slowly disappearing small scale industry. Vishwas tells about his film and more…

The pain faced by the small scale industry is an unusual concept. How did you get the idea to make this film?

It happened when one of my friends was talking about how we should consume local products than international branded products. It struck to me that slowly the small scale industry is fading. That is how I thought of this story.

How did you get into film making?

Back in college we were making short films. From childhood this concept intrigued me. Habitually I am very interested in writing. I have my own stories. Madake Mathadidaga is my proper short film.  I have no official training on this subject, but have learnt a lot from Youtube.

What is that you want to convey with this film?

In India there are different types of small scale industries. Now due to less profit and international brands entering the market these small scale units are shutting down. I wanted to show the pain faced by these people who are struggling with no business.

Was making this film challenging?

Yes it was. I was in Manipal and I had to coordinate with the students who acted in the film. Since I was working I did not get time to train them. We practiced only on one day. I worked for a newspaper and getting leaves was not easy. Somehow I managed to get two days leave and shot this film. Some props were not available and it was raining heavily that day. Also budget was another serious constraint.

How did you get a feature film effect into this film?

I always hoped that my film looks natural. For this I learnt a lot from Youtube. We prepared story board for some scenes. Others scenes were shot based on the concept and on my instructions.

How you drawn inspiration from real people for characterization in the film?

No. This is the work of fiction. Not related to anyone.

Srujan Tonse scored the music. I have never met him. We got his contacts online. I just told him the kind of music I was looking for and he provided me the same.

Any cherished memory attached with this film?

There is a scene where the hero returns home. It is a sunset scene. We had to wait for nearly two hours to shoot this simple scene.

I plan to do some documentaries and short film. A script on an unusual concept is also getting ready. It will take another four years to go on floor.

Many of them actually. I like Rakshit Shetty’s film Ulidavaru Kandanthe. This is unique and is very natural.

Are you game to remake films?

No. Not really. I would not want to do it as I want my creative liberty.

There are many apps for feature films, but for short film makers this is a boon. Youtube has its own limitations. This app will give the short filmmaker a boost that his effort will not go waste. The film will get international exposure, which is a great thing.