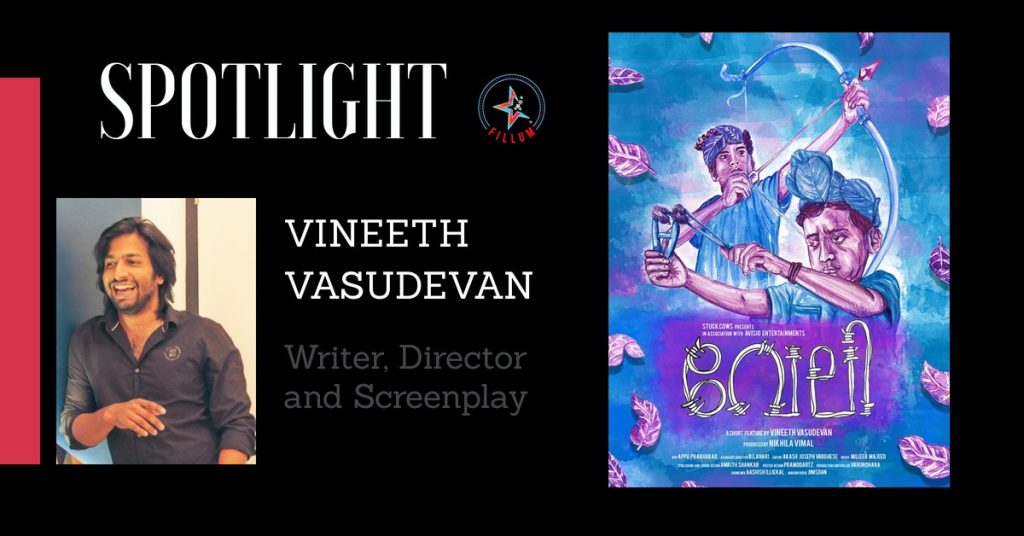 Vineeth Vasudevan says that the caste system is still deep rooted in our country and he wanted to showcase it subtly in his film Veli. The film does make one think and leaves you with a smile, such is the climax. Vineeth tells us about his film journey and how he made this beautiful film…

A chit chat with Vineeth

How did you get the idea of making a film on caste system?

We all think that caste system does not exist anymore with people getting educated. But that is not true. Even today the caste menace is deep rooted. I have seen this mainly in temples. People do not want to acknowledge this. Consciously and unconsciously this is happening. I wanted to do show this delicately through my film.

Let’s talk about your journey in the film industry…

I have done many short films before. My first short film is Inverse. I got some recognition with this film, even won some awards. Some more short films followed. I also used to write for movies and started doing small roles in films. We have a team and all work is done together. I am passionate about acting and I also love to direct.

Was it easy making Veli? What were the challenges?

Budget was a big challenge, but we managed. My friends helped. But the biggest challenge was managing the kids. I used sync sound for my film. It was risky and getting the best from the kids was not easy. People’s reaction to my film was also bothering me. This was another block I can say.

Veli is well shot, how did you bring in that effect?

I have made lot of preparation for this. There is an obsession in me for the right cinematic approach to shoot a scene. Without that in mind I will never shoot. Also I wanted the film to reach every layer in the society. This is not just for the intellectual. People should not be bored. After thinking about all this I worked accordingly and put everything in place and got the desired effect.

Do we see real time inspirations in Veli?

My childhood was fun filled. We watched lot of dramas at night and would enact the characters in the morning. This would happen behind our house with the neighbourhood kids. I wanted to put this part in the film. I merged this with the caste issue.

Your cast and technical team…

When I was looking for the cast, I was informed that there are some kids who act in street dramas in the village. We all met and when I explained the story to them and they agreed to act. The energy level of these kids is very high. The lady who played the mother’s role is a known actor and now she has acted in some Malayalam film. Earlier she used to act in dramas. The teacher’s role is done by me.

Tell us about the music of Veli?

See there is a song towards the end of the film. It is called the tarpam paatu. It is played by a particular caste. In temples there are singers who stand close to the deity they are generally of higher caste. The tarpam paatu is sung by low caste people and they stand far away from the deity. I used this song in the climax because I wanted to depict the anger of the young boy. There was an energy in this local song. A lady from Palakkad sang this for my film. Music director was Mujeeb Majeed gave the other parts of music. He is a popular musician.

Any memory that you cherish when you made this film?

If you see my Ravana he is a small guy. This is like a contrast with the Ravana that we generally imagine. When I was selecting these kids, I said a lengthy dialogue and asked which of them could act and say this. This kid just got up and said the entire dialogue and he had heard it only once. That stunned me. So much of positivity and talent is there in the villages.

Just before the lockdown I was to act in a movie. I had a prominent role in that film. A film in my direction will commence early next year, the title has not been announced.

Filmmakers who have influenced you?

This is a tricky question! I have been influenced by many. Padmarajan and K J George’s films have affected me hugely. Sometimes the films influence me heavily and not the filmmakers. I want to have my own style of filmmaking. I also like Emir Kusturica, his films are beyond reality.

What about remakes, will you ever do one?

Probably Black Cat White Cat. This film is by Emir Kusturica and is a hilarious one. I would like to remake it in Malayalam, with my interpretation on that film.

This is a platform of quality stuff. The team seems to be very enthusiastic. A digital platform for short films is a great idea. It gives us so much exposure. I find it a very interesting concept.