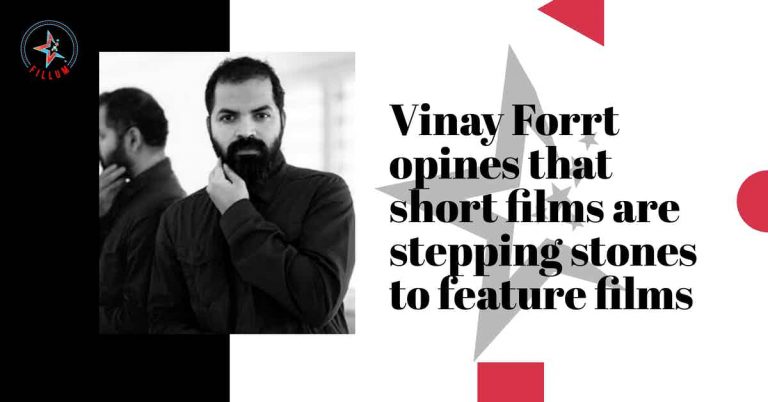 Vinay Forrt’s performance in the short film ‘Ettam Page’ is intense. He did this short film for a friend and also found the story intriguing. For the first time he played the role of a journalist and loved the intensity. Journey into cinema has not been easy on him, yet he struggled hard and made it to the top league.

Basically I did my schooling in an Anglo-Indian school, which seldom promoted art. When I was in fourth grade I was associated with a group called Bala Sangam. I was into theatre, dance at a young age with this group. Realization dawned to me that this is what I wanted to do. This was a turning point in my life and it continued till 10th grade. Post plus two studies, I told my parents that I wanted to join School of Drama in Trishur. They were supportive of me, but wanted me to finish graduation. I realized that the road that I was taking was not what I desired. A friend of mine introduced me to a theatre group called Lokadarmi. So from the first year of graduation itself I was associated with this group. I did odd jobs to sustain here. Various forms of arts was what I learnt. This was a weekend class. I learnt a lot and got good exposure from this weekend class group. My absolute focus was here. As an actor I struggled a lot yet I was persistent. And today I feel that it was a right decision. On my first attempt itself, I made it to the FTII. This was a major turning point for me and things looked good after this.

What prompted your decision to act in short films and make a slight shift from feature films to short films?

The writer of my short film Ettam Page is very close to me. He is a journalist. There is a film festival called IFFK in Kerala. So we are a group of friends who attend this festival. Not only people involved with cinema but many who have a passion towards films also attend this festival. Shamsudheen P Kuttoth wrote the story for Ettam Page and he narrated that to me. The director Thanzeer S is also a close pal. He was working in a cinema CD shop and learnt all the nuances of making a film from there. Added to this the script was intense and dramatic for an actor. It was challenging for me. I personally love drama. If an actor can perform a dramatic scene convincingly, appreciations will flow.  If you see the film, it is one of its kind. That is why I went ahead with Ettam Page.

What do you have to say to short filmmakers if you were to give a few words of encouragement?

Everyone loves to act, but not all can do justice. Our dreams and realities are two different things. If you want to test waters in film making, then you must go with a short film. This is what I have learnt. It is easy and economical here as well. Short films are the stepping stones to your dreams of making a feature film.

What are the differentiating factors between taking up acting in short films vs feature films?

What is the kind of preparation that goes into acting in short films?

Preparation is almost similar. As an actor I always do my own preparations whether it is a short film or a feature film.

Does having formal training give you an edge in the cine world?

My case was a different one. I am from a middle class family and I have no contacts in the cine world. For a middle class person cine industry is not a cake walk. The advantage of having a formal training has helped me a lot. But it is not a necessity. We know so many brilliant actors who have not had formal training. Every film is like a workshop for us. Frankly I am still learning and it is a process. Honestly, formal training is not a must, but it does help.

What is the kind of acting that you like?

I am an actor and I should be capable of doing every kind of role and every genre of films. When I was in FTII, my friends made short films and they generally cast me for intense, serious or emotional roles. My first film in Malayalam cinema was Rithu and that was also a serious role as well. It was only with Premam that I did a role of Vimal sir with a touch of humour. Probably this is why people associate me with comedy. Vimal sir changed my equation in Malayalam cinema. Premam is one cinema that can be watched even now and be enjoyed.

Back in Bala Sangam I was the youngest artist. I was appreciated for my performances. This was my basic inspiration. Mohanlal’s films have inspired me greatly. In FTII too I have seen many films and they have inspired me to a large extent. Thankfully I am only inspired by them and I do not copy them.

You will be seeing me in Churuli, which will have an OTT release. This will be an entire different experience. This film is made by Lijo Joseph Pellissery. Another film is Maalik. It has taken six months to complete this one. Fahadh Fazil is playing the lead, and I am playing a very important role. In both these films my characterization is different and are serious in nature. There is also a film titled Mohan Kumar Fans and this one is an out and out comedy role. Not the kind that I do usually. It is completely a commercial film.