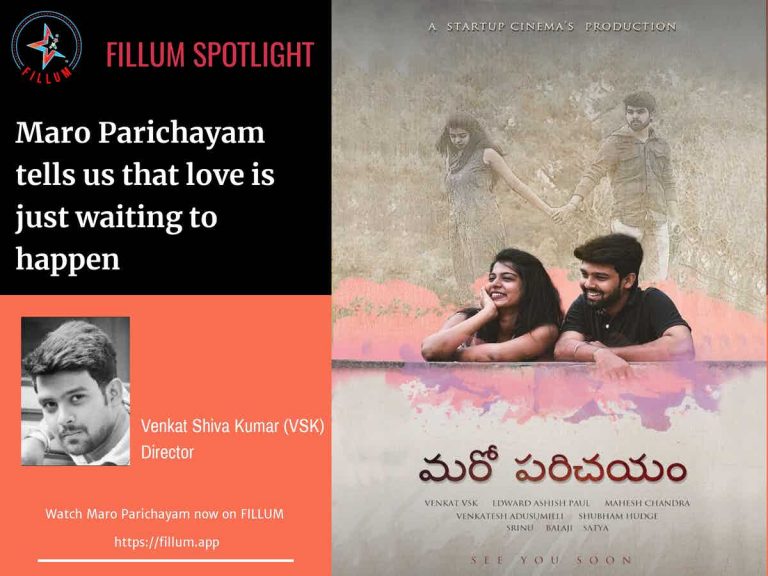 It is a mind blowing coincidence, but he finds true love.

Director Venkat VSK loves the concept of romance and coupling it with surprises gives this director a kick. Maro Parichayam is a sweet subtle romance combined with instances of coincidences. The actor-director talks about his film and how he made it.

Maro Parichayam is a sweet romantic story laced with coincidences, tell us about it?

I have a soft side for love stories and giving a surprise in the end is what I like. In Maro Parichayam too, I have taken these two concepts and mixed them at the end. So this is a love story with a twist. Meanwhile I also like other genres.

How did you foray into films?

From childhood I loved films. I imagine a lot, talk to myself and love writing. Sometimes I talk to myself while riding my vehicle and say the dialogues. Mirror has been my companion when I act. If I really love something then I visualize the scene like an audience and only then I write it.

What did you want to convey with Maro Parichayam?

I did not want to say anything. It is just a simple story that I wrote.

From inception till the end of shooting, was it an easy experience?

No, not at all. I did not have a camera in the first place. We hired it. The distance from there to the location was huge. I had to do multiple jobs. That put a huge pressure on me. Shooting was another difficult task as I had to narrate the script and get everything right. Post-production was also an issue, as incorporating music with the scenes was a tedious task. The music director who was to give the music initially did not do his work. This was severely disappointing. Then I had to get another person.

We see the effect of a feature film here, how did that happen?

Like I said I had to do everything from scratch. The team took real care and gave their best.

Have you drawn inspiration from real people for any characters in the film?

No. These are just fictional characters.

The leading lady is not an actor. She was approached to make improvements in the script. Since she was interested in acting we gave it a go. I did not train her. It was her first film and I was impressed with her performance.

Do you recall any unforgettable memory from this film?

Everything about this film is unforgettable for me.  Every day of the shoot was a cherished memory.

I want to make good feature films. I am learning in that department. Meanwhile I will continue doing short films as well. There is not much of a difference between the two, while making them. Only the screens are different.

I have learnt from every film that I have watched. It has been a learning process. Each seasoned director has his niche and I am observing all those nuances.

I do not want to even touch them. It is a difficult proposition as there will be comparisons with the original. Slight mistakes will not be forgiven. So better not touch it.

This is a great platform. Our work will get noticed. Fillum is not just putting our films on their platform, but also giving insights to our film, making viewing easy for the audience. Even the cast and crew are getting recognition, which is an amazing concept.