The Ghost wants something that this couple own. Anuj Purushothaman's Obira tells us that ghosts are not always behind lives - FILLUM 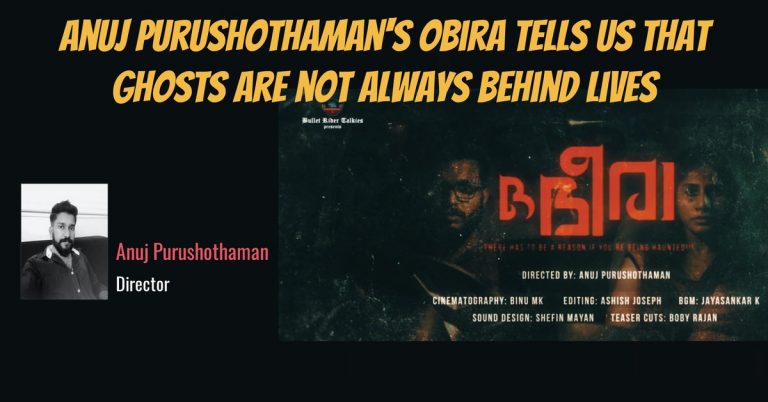 The Ghost wants something that this couple own. Anuj Purushothaman’s Obira tells us that ghosts are not always behind lives

Anuj Purushothaman did not intend to make a horror film, it was comedy that he was looking at. But the flow of his thoughts were such that he had a perfect scary short story in hand. Obira is unusual, because you don’t get to see ghosts here, yet it does a perfect job of scaring you. How? Anuj tells us in this interview…Read on…

How did you form this story?

Actually I was planning to write a comedy story. Every time I thought of the story various thoughts came in. I had made some message oriented short films and this time I wanted to try comedy. Creating comedy is difficult. I was not convinced of my thoughts and then dropped it completely. Then I moved to horror and created a story in that genre. This was approved by my friends and my wife. That is how Obira happened. I wanted to try something new with no women or child ghosts.

I am an IT professional working in Trivandrum. Writing is my hobby. I used to spend lot of time writing on weekends. In 2009 after watching Gautham Menon’s Vinaithandi Varuvaya I was so highly influenced that I just wanted to make a film. My first film was a 10 minutes short film called ‘The First Floor’, it was accepted well and my journey in short films commenced.

Were you trying to convey anything with this film?

Yes. I just wanted to convey to the filmmakers that we do not always need women or child ghosts. We can try something different.

What challenges did you face with Obira?

So many of them. We shot the film with basic equipment. We wanted to hire a truck to get good lighting. There are another two-three things that did not happen due to budget constraints. That upset me a little.

How did you get a feature film effect into this short movie?

Actually I haven’t used any high end equipment. Even for the film’s execution I did not depend on the story board. I had it in my mind. It was just conveyed to my cinematographer. He did an exemplary work that is why you get to see that effect.

When I wrote it, Obira was a work of fiction. But after the film was released there were many people who approached me saying that this has happened. Maybe not the core story, but the ghost effect while travelling.

Abhilash is the male lead. He is an IT guy and expressed interest in acting. I did not have anything in my mind then. Abhilash, Vipin and I, together framed the base plot of the story and then I wrote Obira’s script.  Abhilash wanted to act as Kishen. Getting the female character act at night is difficult. They have so many problems. This was a night shoot and they did not agree. When Devaki was approached, she refused as she had moved into feature films. Nevertheless she wanted to listen to the story. After listening she agreed to bend her rules and was game to do Obira. She was like an assistant director for me. The last car scene in the film was done by her. I really owe a lot to her. Binu is the cinematographer, he did a great job.

Music has done the magic in this film…comment?

Obira has music by Jayashanker. He is working with a leading Malayalam music composer. He wanted to do something independent but never got a chance. I used to tell him what I wanted and he used to work hard. The first few pieces were okay, but with suggestions he just gave the perfect score. When the film was released he was appreciated the most.

During pre-production stage I was looking for locations. I was searching for a Y-junction and a cell. Wherever I go the Google maps took me to the wrong place and in this wrong place I would find my shoot location. That is how I located the asylum which is actually an orphanage.

Definitely I would be writing a lot and making short films. Feature films would not happen for some time. I feel I am not ready yet. Probably I would like to work as an AD for some popular director and then get into full time direction. I am also open for new scripts, where I would get to direct someone’s thoughts.

Gautham Vasudev Menon it is. I am so heavily impressed by his style of filmmaking. He is a legend. But I have not tried any of his styles. But I am in awe with his work. In Malayalam, I like Renjith’s films.

Would you make remakes?

Yes I would. I wanted to make a movie similar to Vijay Sethupathi’s starrer 96. I had similar ideas. But when I saw this film I dropped the plan as it already made.

What is your impression about Fillum?

I just love everything about your app, when compared to other apps that are available. There are so many filters. You guys are getting people behind the camera into limelight that is something really great. Everything about this app is innovative.  I am glad that my film will be a part of Fillum.