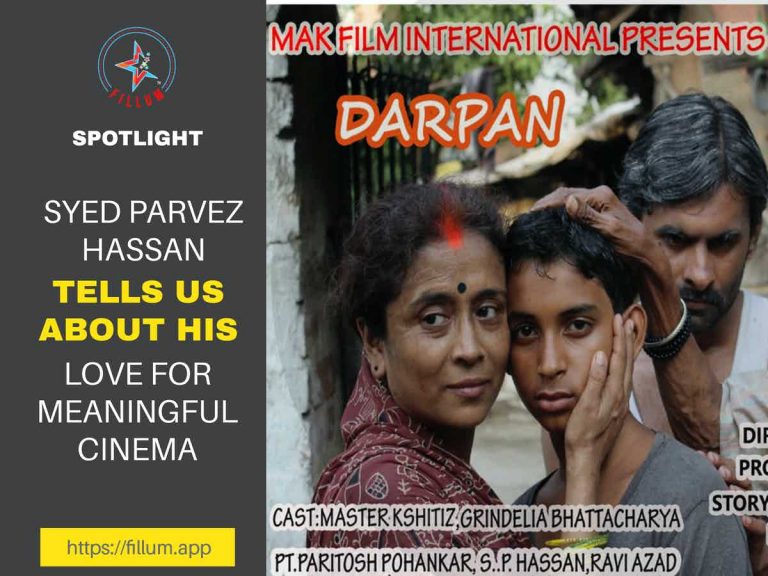 Syed Parvez Hassan tells us about his love for meaningful cinema

Syed Parvez Hassan is a witness to several generations of cinema in India. Some decades ago he was a well-known persona in Bollywood. The actor-producer wants to be remembered for making meaningful movies with messages that will guide today’s generation. He has been a testimony to how cinema has evolved over the years. Presently he has settled in Kolkata, but he says his craving for cinema still exists. Seventy plus Syed Parvez, does not shy away from doing small meaningful roles even today.

How did you get fascinated by film making?

I saw some films of Dillip Kumar and also went to the premiere of a Madhubala starrer. This sparked an interest in movies. After shifting base to Mumbai I was closely associated with many film stars. But there was a struggle involved. Back then I purchased a house in Mumbai and started working in many films. Those were all small roles. Recently I moved to Kolkata. Here I met a director who shoots short films. That is how I started working in short films.

What is that you look for when you want to produce a film?

Message oriented films are what I like. These days there is a lot of vulgarity in films which I detest. My films should be a learning experience for others.

Generally we see that your films have a message to convey. What is the intent behind this?

Agreed that films are for entertainment. But these days mostly the films that come out are rubbish. Earlier the films would have beautiful stories and would have great messages. Nowadays we rarely see good meaningful films. I want people to remember me for my message oriented films. People are producing trash for money. But money is not everything. We have some responsibility towards society.

If parents are not capable of supporting a family due to some disability how will the family be fed? So many families are facing this situation. Labour act is there, but the government should also facilitate people facing such situations. We have tried to convey this through Darpan.

Has film making been easy for you? What are the problems that you face?

Some small issues used to be there. But I have not faced any major problems.

Sir, we see that you have acted in a couple of films. How has the experience been?

It has been a great experience. When I perform, I do not act and I try to be as natural as possible. I think that this is my story and my life and give the shot. Probably that is why it comes out that way. If it is a tragedy I think that this is happening to me. Even my directors appreciate this.

How has film making evolved over the years? Has there been a massive change?

There has been a sea change in filmmaking these days when compared to the 70s and 80s. Those days acting was felt, it was an emotion and these days it is not the same. Acting just happens for the sake of it. There is so much vulgarity and the young generation is going on the wrong path. Respect for parents and teachers is deteriorating. This is why when I make films I keep these things in mind. It is my effort to steer the society in the right direction.

Once your films are released do people relate to the films you make?

Yes many people come and discuss the films that we make. There is one film called Khhawish. This film was screened in festivals. After watching this film many people lauded us for making this emotional movie. Some even cried after watching this short film. I was overwhelmed seeing this kind of reaction.

Due to some health issues I have stayed away from arc lights for a while. But now that I am able to move around so I am just producing films. I hope to make a film on the bond shared between grandfather and grandson. I love my grandson a lot. Also I want to make a film on a superstar who has aged now and lost his memory. Parwarish and Darpan are the best films that I have acted in.

What is your opinion about Fillum and how it will help the upcoming filmmakers?

Fillum! I just love this name. Old people like me can watch meaningful films on this app. Many of my films are already playing on your app. My blessings are with this app. I pray and hope that you and your team do well.