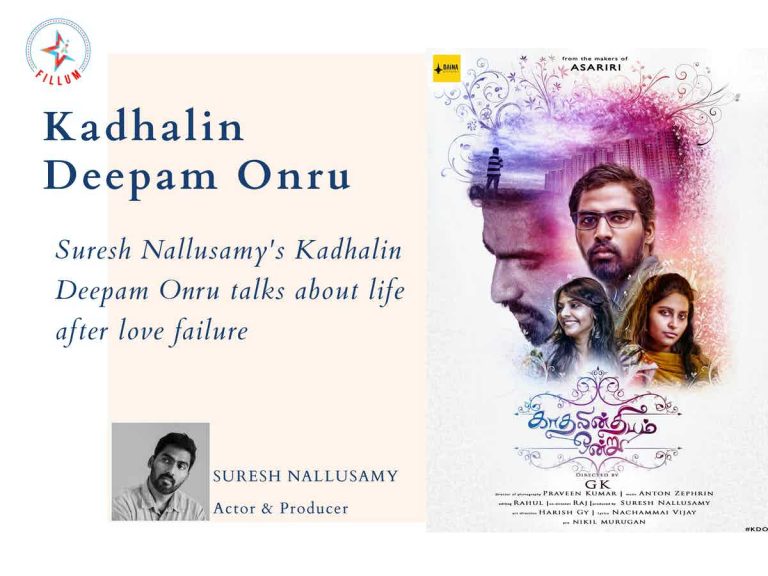 A young child was mesmerized by the Tamil film ‘Karakatakaran’ and decided that very moment that he will become a film actor. Meet Suresh Nallusamy, who loves films and started his journey into films with the short film ‘Kadhalin Deepam Onru’, a simple love story. He has learnt acting from observation and reading, says Suresh. The actor-producer Suresh Nallusamy talks about his movie and how he loves cinema.

A chit chat with Suresh…

It is a beautiful story about love that didn’t materialize. How did this film happen to you?

In 2015 I was looking at good scripts because I wanted to foray into acting. I saw a short film ‘Assariri’ which was directed by GK. I really liked it as it had a beautiful narration. I requested him that I wanted to do a film similar to this. He had a simple love story and asked if I was interested. I was game. So it was he who wrote this story. After meeting me he made some changes and this is how I acted in Kadhalin Deepam Onru.

As a child I was mesmerized by movies. I saw this Tamil film ‘Karakatakaran’ and my love for films blossomed. My father would take me to films and every time I saw a film I was in awe. It was then that I decided to become an actor. I was adamant that I will not study and films were my destiny. My parents pacified me that I can pursue my love for cinema but should complete my studies as well.

Not all love stories are successful. There are various factors for failure, it could be misunderstanding or parents’ opposition or something else. I think if the love is successful it is a divine feeling. But if it fails we should move on in life and not make our life miserable sticking to old memories.

This film was shot in seven days. Finding the perfect location was a big issue and we did find one. Also every scene in the film has been shot after good detailing. Our director was very particular about that. So scenes which could have been normally shot in 3-4 hours, took around 16 hours. All this was because we were aiming at perfection. We never compromised on anything.

Have you taken any formal training in acting?

No I haven’t. From childhood I have watched a lot of movies. I am well read when it comes to acting and movies. Maybe this has helped me massively. I got into the character totally and probably it gave me the desired output.

After this film was released many people wrote to me saying that this was their story. Some have watched the film several times and cried. People started recognizing me because of this character. I was simply amazed with how my film have been received.

Your music in this film makes a huge impact. Tell us more about it?

Music was the driving force in Kadhalin Deepam Onru. Anton Zephrin scored the music and this film would not have reached where it is now without it. Our director was clear about what he was looking at and he and Anton worked on it.

Right now I am working on a 35 minute Sci-fi thriller. All work of this film is complete. It is in post-production stage. CG work is on and we will be bringing it out soon. Probably by the end of 2020.

VZ Dhorai  and Selvaraghavan are my favourite. Then there are directors like Bala, H Vinoth and Haleetha Shamim who have had a huge influence on me. In future I am looking at working with some of them.

A film that you have loved and you would like to remake and act in it?

‘7G Rainbow Colony’ by Selvarghavan is my all-time favourite. If I were to remake a film it will be this one and I would love to play the lead role.

Fillum will rock! OTT is the in-thing today. It is a good platform. Your app has quality content and everything is categorised here. The audience have it all on their finger tips and need not go searching for good films.