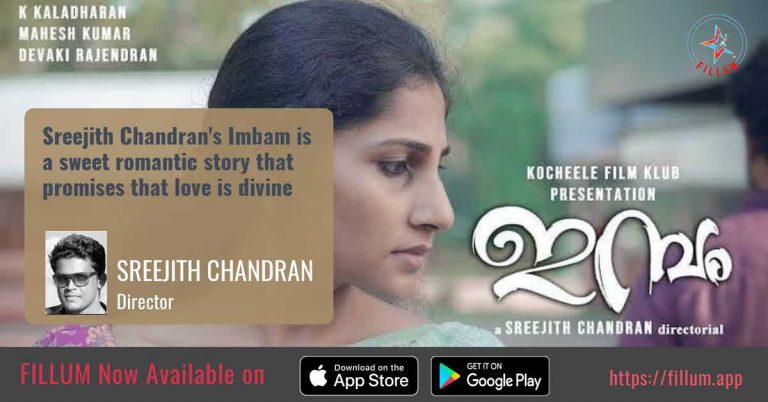 Sreejith Chandran weaves stories with the happenings around him and the things that he sees. He is a keen observer and his mind uses the things that impresses him. Imbam just happened this way. It is a romantic film and there is nothing preachy about it. Imbam leaves with a strong feeling.

Sreejith Chandran talks about his film…

How did you frame this story?

I have been a keen observer always. Several situations or characters are stored in my memory. Also we hear of lot of things these days. So all these thoughts and characters made me form this story.  Stories are always brewing within me. Some random thoughts, the characters in my mind all got together and came out as a story.

Imbam is my second short film. I am an engineering graduate. While doing my job in surveillance department in the University I was also interacting with other media persons. I also have friends in the film industry and my interest lies here. I haven’t been trained in film making. So I began to study the techniques of filming. The thought came in that I have to make a film. This led to scripting. Some friends helped me and I made my first film.

What message are you trying to convey with this film?

Conveying any message is not what I was looking at. But delicately I have touched upon the subject of wars. If you see Imbam you will know how the old man talks about wars. The film was not a preachy one, it is a romantic story.

The film is beautifully made. How did you get that effect?

Like I said before I learnt the techniques and I believe that if you have cinema in you, then surely you will make it. I observed many film makers and studied what they have done. This was done on my own personal level. I am not fully satisfied with my effort and I am learning.

Does Imbam have any real life reference?

Not really. But after the film was out, people did feel very emotional about this. Many strangers would reach out to me about my film. There was a connection they said. It was a film of unconditional love, so that connection must have been felt.

All the three actors are popular in cinema. The lead hero Mahesh got into a proper feature film after Imbam. The shooting is going on. The film should be ready in a year or two. They all have very good film and theatre experience. This helped me a lot. All of them have put maximum effort and emoted perfectly. They just loved the script.

Music was given by Vishnu. He is working with music director Vidya Sagar, who is very famous. Vishnu is now working in a Mohanlal film. He is my friend and helped me a lot. Imbam got beautiful music because of him.

Any unforgettable memory with Imbam?

Oh yes! The shoot was rescheduled three times. We shot the first scene in one place and then had to stop due to some issues. We had to change the location. I could not use this shot because the rest of the film was shot in some other location. But the first shot came out really beautiful and I could not use it. This is a painful memory actually.

More short films or feature film opportunities in the anvil?

Right now I am working on a feature film script. It is almost complete and I am working with producers on it. Probably in a year or two everything should fall in place.

This is a difficult question. I get to learn something from every film that I see. But Manirathnam’s films are closely observed by me. He is a master craftsman and very beautifully he portrays emotions. I love this kind of detailing. And I am learning it.

Actually remaking does not interest me at all. I feel with remaking the sanctity of the classic or any film for that matter gets disturbed.

What is your opinion about Fillum?

This is great opportunity for short filmmakers and directors to showcase their films. I hope Fillum grows big in the coming years. I wish them all the very best.