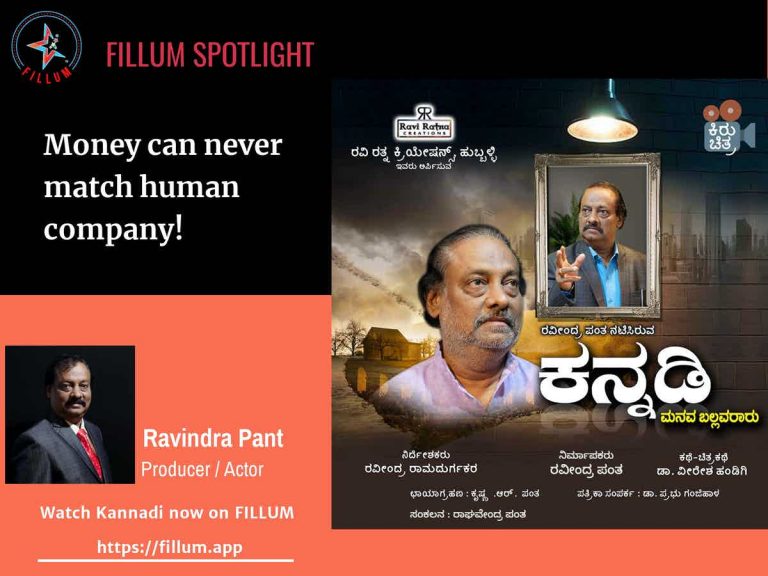 Actor-producer Ravindra Pant created the production house Raviratna Creations to make good cinema along with his sons Krishna and Raghavendra. He had a tilt towards art since childhood and still nurtures the dream of making it big in cinema. When he made Kannadi he wanted to express two important issues to the society. Ravindra Pant in detail discusses his thoughts and his love for cinema.

Kannadi has a touching story. How did you arrive at this?

During the initial days of Covid 19 we were writing stories.  My sons and I just kept discussing and wrote down this script for Kannadi. What can a pandemic do to a person who thought highly of himself when he was in power with a high profile job? My sons and I along with my journalist friend Veeresh arrived at this story.

I was an LIC development officer. From childhood I was inclined towards arts. Once Mr P Seshadri was auditioning for his film. Along with my son I went for the audition. I was selected for a role. This film won two awards. Thereafter I acted in another film and a couple of serials. I have also been into theatre as well.

Some Government officers think very highly of themselves and all they think is of money. But once they retire and are all alone, no one cares about them and all that money is meaningless. They should realise that and remain humble. Children move away in search of better life. But when parents get old, they need support of their children. So we wanted people to think over these two points.

What challenges did you face, when you made Kannadi?

This film was shot when Covid19 was at its peak in the month of May. There was no movement around. Shooting the film was difficult. And the resources were limited. Nobody was available and some artists were new. More plans were in place for the film, but we could not execute them. Another 5-8 minutes of shots was to be added but that did not happen.

Kannadi is a well shot film. How did you envision it?

My elder son did the cinematography for this film. He has done several videos and has got well versed in this. Added to this he has got training from Kannada director Nagathihalli Chandrashekar. He gives importance to perfection. I have my own studio, which is well equipped and we did everything here.

No direct inspirations are there in this film. Generally this story might be of many officers and high profile people, but in particular we have not pinned on anyone. Some people who have retired and are facing this situation, could relate to my film.

Tell us more about Kannadi’s music?

We picked a few pieces from Youtube free music. The kind of music that was suitable for the film was selected by my son. Due to the pandemic we could not get musicians to score music for Kannadi.

I have seen many people in my life like this. I felt that this role was entering into my body when I was enacting it. It was a different experience altogether.

Many people are suggesting me to do feature films. We are thinking about it. Short film plans are in place. Also my team is working on web series as well.

Which film-maker or actor has been a strong influence on you?

Dr Rajkumar has been a huge influence on me. I like his style of acting. Punith Rajkumar is a good dancer and I love his energy. If I get a chance I would be game for the kind of dance and energetic roles that he does.

I am extremely glad that my films are a part of your app. Your team in the US has seen my films and have taken it on your app, this is a big honour for me. Also the way you select the films are different. Such apps will help upcoming filmmakers immensely.