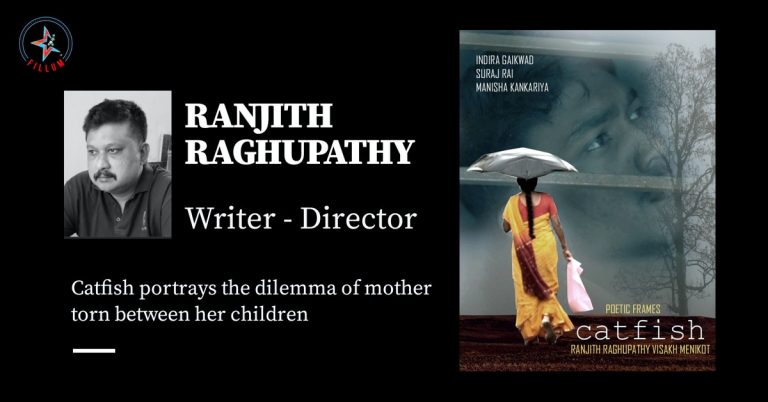 He makes meaningful hard-hitting films. They have a lot to convey in terms of emotions. Catfish is one such film, which shows us the dilemma of a mother who is torn between her rapist son and pregnant daughter. Ranjith has captured the story well and tells us what made him do this movie and more about it.

“A mother, her pain and the silence that speaks volumes”

How did you get the story of Catfish?

This is a real story and my favorite film. The story is inspired by a small news that I read in the newspaper, about a rapist brother and his pregnant sister. This made me think. My heart went out to the mother, what would her state of mind be? How is she dealing with the situation? All this made me write this story. What will be the definition of life for her? This haunted me.

How did you enter into film making?

I was working in the school and I am an artist. During my twenties I accidentally happened to see the Japanese film Rashomon. This film changed my perception towards cinema and life in general. I started reading about cinema and watching classics. Cinema is a combination of writings and visuals. I am also a writer.

What were you trying to convey through Catfish?

I am trying to essay the dilemma of a mother who is stuck in such a situation. There might be millions of explosions happening in her.

Any challenges you faced while making this film?

I do not recall any such thing. It was not that difficult. The film was shot near Hinjewadi. The head man (Sarpanch) of that place was of great help. I wanted to shoot in a real juvenile home. That was challenge. We did not get the permission. Then I shot that scene in a school.

Any real life references after the film was released?

Not really. No one approached me after the film was released. I did not even get any criticism or compliments for this film.

The mother’s role is played by Indira and she is my maid. After the story was formed in my mind I asked her if she was interested in acting. She said she needs to ask her husband and he permitted. This boy who plays the son, I got him on Facebook. For the girl’s role it was difficult to find the actress. And I found her in a theater group.

Music does all the talking in your film. Comment?

Rahul Srivastava has scored the music for all my film. We worked together and I told him what I was expecting and he gave the perfect tunes. For this movie I told him that I wanted a sad music and he suggested the flute, to give that melancholy feel.

Cherished memory associated with this film?

Indira Maushi became a star in the school after the film released. No one knew her and this film was a big one for her. That was very memorable for me.

My dream is to make a feature film. I started making a full length film, but when the shooting was over the producer disappeared. I have to complete this film and this is my dream.

Akira Kurosawa and Ingmar Bergman have strong influence on me. I also like Adoor Gopalakrishna and Satyajit Ray. Nevertheless I don’t follow anyone’s style of film making.

I don’t believe in remaking. I will never remake any film.