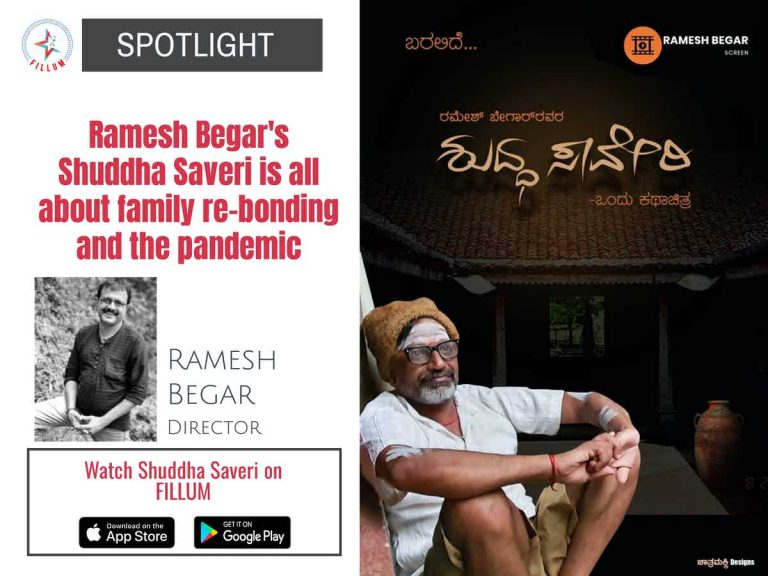 Director Ramesh Begar merged a common issue that Malanad homes are facing today with the existing pandemic and laced it with the scenic beauty of lush Malanad. Shuddha Saveri is a treat to sore eyes and will make you fall in love with the hill town again and again.

Ramesh Begar has more than 25 years of experience in Yakshagana, drama and television. The director tells us in detail about his film and what he is trying to convey…

How did you form this story?

My friend Vasudev Maiyya wrote a one line story. I used to write short stories for columns in newspaper. This is what we see regularly in Malanad region. People are moving in search of better fortunes leaving their ancestral homes. Moreover now there is a pandemic and people are returning home. Based on these two threads I formed the story of Shuddha Saveri.

I am a Yakshagana artist and from my school days I have been in dramas. We have our own troupe. Organizing cultural events has been a part of my profession. In the early 90s I acted in a serial called Bogale Rama. That is how I entered into cinema. I have worked with Girish Kasaravalli as an assistant director. Apart from this I have worked in Ananthnag starrer Udhbava, which was directed by Kudlu Ramkrishna. My first short film or serial was Pallavi for Doordarshan. Thereafter I have made several short serials. In 2008 I made a serial for Zee Kannada called Yeke Heege Namma Naduve. Most of this serial was shot in Shringeri. After that I kind of stepped back and relocated to Shringeri. During this time I got active in dramas. Now during the lockdown we cannot do dramas, this is why we made this short film Shuddha Saveri.

Were you trying to convey anything with this film?

My main intention was to showcase reality to the audience. The main character has an intention of re-bonding with his children. He is least bothered about the pandemic. On the other hand we get to see how his hopes of bonding with his family gets quashed by the pandemic and the attitude of the youngsters in his family. Also I wanted to show that rumours can affect relationship. Just because Chandrayya sneezes the family gets it all wrong. Uneducated Chandrayya gets self-quarantined, educated children just go with a sneeze and label him as corona affected.

What challenges did you face while making this film?

This film was made when we were in strict lockdown. This was the biggest challenge. Entire shoot was done following all the norms given by the government.

Chickmaglur was in green zone then. Not one case was reported in our place. Generally when we make a film we have Bengaluru dependency. We did both pre and post production work in Shringeri. All technical work was done at my home. We maintained social distancing when the film was shot.

How did you get a feature film effect into this short movie?

We have used very good cameras in the film. The cinematographer was trying something new. I have experimented a lot with the shots and angles. This was very effective. My artists have worked with me before and I know their acting perfectly. I got balanced performance from them. My daughter Rashmi advised me as well. That is where I brought in the new generation thinking. She has also acted in this film. The locations were well known to me. This helped a lot.

Well I haven’t drawn inspiration from real people. But so many people approached me citing various stories that had semblance with the story of Shuddha Saveri. Someone approached me and asked if the sneezing scene was inspired by story that he wrote.

Tell us about your lead cast?

Chandrayya’s role is played by Ravi Kumar. He is a seasoned actor and has played variety roles. He has done good prep work for this role as well. The women in the film are housewives who have acted in plays. They love acting and have worked with me before. All the other actors and their acting capabilities are well known to me.

Your Film music makes a huge impact. Tell us more about it?

Shuddha Saveri is a raga. I am also into Yakshagana and I have good knowledge on music. Srinidhi scored the music, he is from our troupe and is from Koppa. I told him about the kind of music that I was looking for and he just gave me that.

It rained heavily on the second day of the shoot. It was strange that when we did indoor shoot it would rain and during outdoor shoot it would stop. The film was shot when summer was at its peak. Due to these rains the harsh summer lights mellowed down and gave a different light affect to the film. Also on the third day of the shoot a news came out that the first Covid-19 case was reported in Chickmaglur. This disturbed our shooting atmosphere. Thankfully it was fake news.

Many people are asking for a second part of Shuddha Saveri. The ending is disturbing and they want justice for Chandrayya. But I want to leave it at that as I want that commotion to stay. I have some more stories for short films and I am looking for producers. Also plans to make some biopics are in place. One is on Shringeri Chandrashekar Swamiji and another is on Yakshagana legend Kalinga Navada. There is story on a lady who has mental disorder at a young age. If everything goes well, the shoot for this will commence in August.

I think Fillum will help the upcoming short film makers to a great extent. Always the film’s reach is a worrying factor for the maker.  This app will solve this issue. Added advantage is that it will get an international reach.