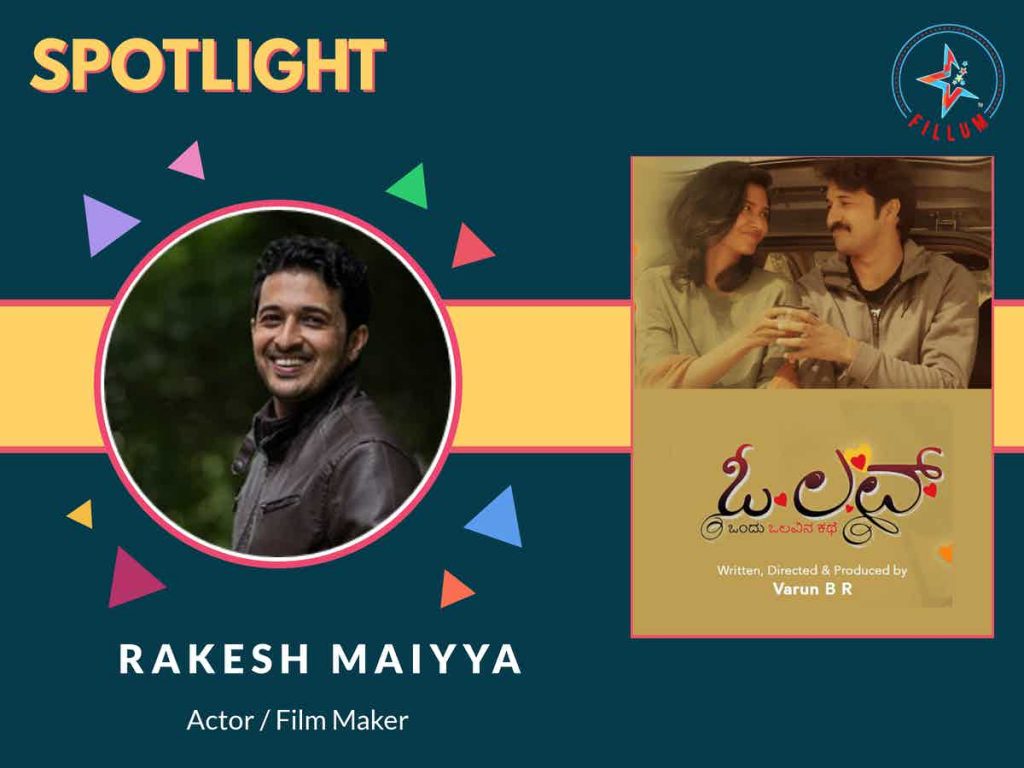 Rakesh Maiyya is a popular face in Kannada cine industry. He began his journey in cinema with short films, later he graduated to television serials and now is into feature films. Rakesh loves short films as he gets to deliver a lot here in a small time frame. He believes that these kind of films make a huge impact when the screenplay is good.

Over to Rakesh Maiyya and his thoughts about short films…

Your journey into television and short films…

Back in college a group of us thought that we need to do short films in Kannada. Compared to other languages, we see less short films in Kannada. We did not know how to go about it. In 2010 we did attempt one short film, it was amateurish. I moved to Bangalore and did a tele serial. Without any clue as to how to go about this in the vast Kannada industry, I shifted focus. I started working for an MNC. Then I worked as a photo journalist. Post that the serial Lavlavike happened. I could not manage time and this resulted in me not doing short films. I went on to do a music video for Hemanth Jois. It got a brilliant response and the video got huge viewership. After this I did Mareechi, it was a poetic narrative. It is about Bangalore. Thereafter I did many short films. Some of them got rich response. I have done more than 20 short films as I love doing them.

What prompted your decision to act in short films and make a slight shift from television serials and feature films?

Oh I love doing feature films as well, but my personal opinion is that short films convey a lot in a small duration. This is a big plus in short films. These kinds of films are easily accessible and the investment is not huge here. I have done feature films, due to the pandemic it is stuck for now. Very soon they will be released.

What do you have to say to short film actors if you were to give a few words of encouragement?

For actors short films are a learning curve. Not all do this for monetary benefits. They give in a lot of time here to get the best in you. Experimentation happens here. Short films teach you a lot if you are a keen observer. This is a great platform to learn a lot in cinema.

What are the differentiating factors between acting in Short films vs Television?

Definitely there is a difference. In serials you are repetitive. They keep saying the same thing over and over again. A character takes a long time to get established. Short films have very less time frame. So you have to emote based on the time limit. This holds good for feature films also. Nevertheless for an actor it is acting be it any media.

Short films are here to stay. If your content is good it will definitely be appreciated. There is a chance of being repetitive and this might bore the audience. That is the flip side. Everything is going online now and it is easy. Beautiful ideas are coming in and lot of creativity is involved. So I would say that short films definitely will have a great future.

Frankly I don’t have any inspiration now. As a kid I was inspired by many actors. Never have I copied anyone’s acting, but yes I do observe actors and learn from their success story. How have they reached where they have? The road that they have travelled is inspiring. I am a keen observer and I am learning a lot through this process.

Which is your favourite genre? Why do you have a fascination for this Genre?

Thriller and detective is my favourite genre. I first read my mother’s text books that had Sherlock Holmes story. His mannerisms, characterizations and his dressing styles are all impressive. This fascination made me watch and read lot of thrillers. This could be because we are on the edge of the seat with such films, that is if the screen play is good. Sometimes I feel that my romance acting is too much. (Laughs).

Do you idolize any actor?

Presently I am working in a tele serial called Sangharsha. This is being telecast on Star Suvarna. Another two films are in the pipeline. Again due to the pandemic it is not moving the way it should have. Shubhamangala is a rom-com film and ready for release.

Do not kill her in the

I was helpless then, but now

Gender inequality issues need to be