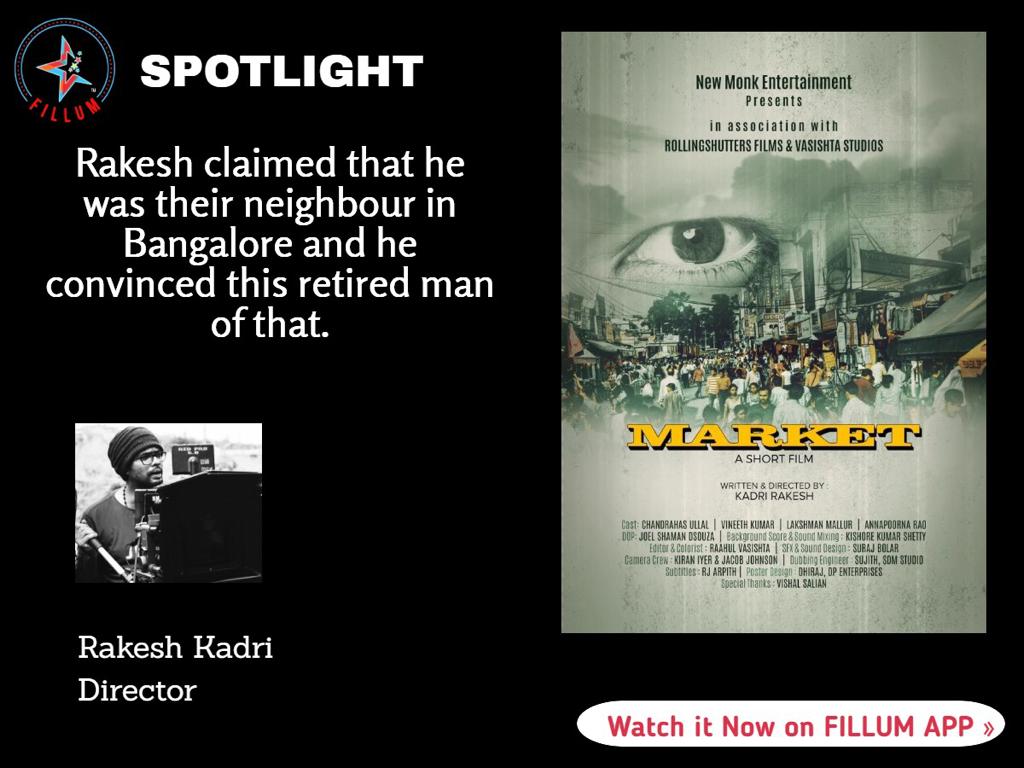 An engineer by profession Rakesh Kadri was lured by the cinema at a young age and then there was no looking back. He is a part of many prestigious Tulu films and believes in making meaningful cinema. His short film ‘Market’ is inspired by what regularly happens in the metro cities. Rakesh vouches on good quality cinema and has big plans for the upcoming year…

Your film has a nice concept. How did you arrive at this story?

This is a common thing that happens in the cities. I have been brought up in Mumbai and such happenings are not an unusual there. I wanted to shoot in the Mangalore market area. The focus was shooting it in a simple and small way.

My career started off assisting directors in Marathi and Hindi teleserials. Actor-Director Rakshit Shetty and I were college mates at Nitte engineering college. We both were struggling back then and were in touch even after college. For some film festival he was working in a short film. He called me down to Udupi. When he started working in his prestigious ‘Kirik Party’ he called me and I worked in this one. I was still struggling in Mumbai then.  Serials limit your creativity. With films you can explore a lot and in a larger way. After this I worked in a couple of Tulu films.

What were you looking to convey with this film Market?

It is a simple message. In life we come across people who allure you with sugar talks. Even if a stranger appears to be nice, you need to let your sixth sense decide and not your emotions. Not many are genuine out there.

We have had so many of such moments. If you see the first scene it was shot in the actual market and it was a single shot. Every time we started working on the first scene someone would come and peep into the camera. Expecting natural acting from the bystanders was out of question. It took eight takes to get the right shot.

Well just before shooting Market I worked as a co-director in a Tulu film ‘2 Acre’. I met this guy Joel and told him about this concept. He has worked as the DOP in Market. When I was working in another film called ‘Girgit’, I met Rahul, the editor of this film. Also here I got in touch with ‘2 Acre’ music director Kishore Kumar Shetty. All these three worked in this film and we were able to attain that perfection that you get to see.

During my teenage days, my uncle met a person at the railway station. He was well dressed and seemed to be educated. He bumped into my uncle and conversed with him, stating his problem of having lost his purse. My uncle helped him. After a couple of weeks my uncle spotted this person again in a similar money asking situation with another person. There are people who con innocent people in the metros. This is a usual thing there.

Chandrahas Ullal is the lead actor. He is a stage actor and has acted in a couple of Tulu films. I met him when we were shooting a Tulu film called ‘Pathis Gang’. The concept was explained and he agreed to do this short film. The young guy is Vinith and he is there in most of my short films. We have worked in many films and he is a brilliant actor. In Kannada he has acted in ‘Birbal’ and ‘Ondu Motteya Kathe’. The other actor is Lakshman Mallur he is a stage actor. Joel handled the camera for this film. Rahul did the editing and music was scored by Kishor Kumar Shetty. Suraj Bolar did the SFX and sound work.

After completing the shooting of this short film, I showed the raw footage to Kishore. He liked it. Then I asked him there itself if he would score the music and he agreed. I was looking for a retro feel music. This was the reference and he did his own stuff later.

The first scene and the last scene was unforgettable for me. The market was packed. When Vinith was giving his first shot, he is walking and it is a back shot. Vinith was requesting people to move away as he was walking into the market.

I have worked as an associate director in this project called ‘Gudbad’. Then there is another film project ‘Jeetige’, where I have worked as a co-director. This is an art film and has Naveen Padil as its lead. This year I wanted to debut as a solo director. But due to the virus nothing of that sort happened. My plans are on hold and I hope that next year things will be better.

During my teenage days I was a commercial film watcher. I moved into meaningful cinema when I saw Ram Gopal Varma’s Shiva. This film changed my perspective about cinema. Sathya was another film that changed me completely. I also like Anuraag Kashyap’s movie. Internationally I favour Quentin Tarantino’s style of film making.

Classics should remain the way they are. I don’t think I will remake any of them.