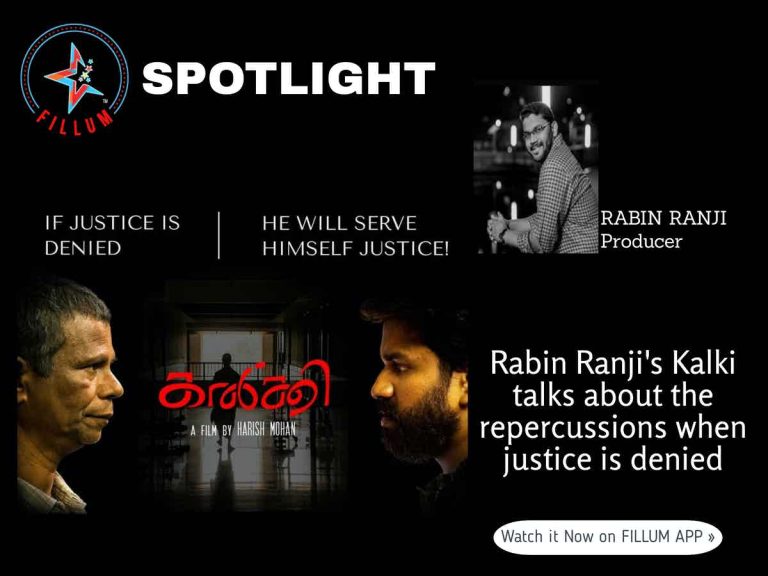 Rabin Ranji’s film Kalki addresses the infamous case that happened in Kerala. It has been a passion for him to make good films. With Kalki the director wants to tell that when injustice happens, if the law does not takes its course, common man might take the law to his hands. Judiciary cannot fail its people who are wronged. Rabin Ranji had his share of issues when he made this film on a tough subject. Yet he succeeded and was applauded for the same.

Rabin Ranji talks about his film and his future plans…

Kalki has an emotional concept that is touching. How did you arrive at this story?

The story was the brainchild of our Director, Harish Mohan who had this thread in his mind ever since the happening of an infamous case in Kerala. It was further developed into a script and executed later on after much discussion.

Films have always been a passion. Long and never ending discussions about movies, reviews and sharing perspectives were a common thing. It was during one of these discussions with a close friend of mine – Sooraj, that we shared the importance of – quality contents, the presence of mainstream actors and musical tracks in short films. The sync was immediate and he connected me to Harish. Kalki was written and directed by Harish and was the first venture under my banner – Ranji Bros. Productions.

We wanted to put forth a message that if the judiciary, the last hope of the common man, becomes a dead pan, then the public might take law into their hands. Sankaranarayan (Indrans) and his daughter are reminders of a system that needs urgent fixing.

What roadblocks did you face, when you made Kalki?

Well, there were quite a lot and in plenty. Logistically, it was challenging as I was travelling from Singapore and the actors and technicians had to come in from various places. The initial schedule planned had to be cancelled as it coincided with the demonetisation that took place in India. It brought our plans to a standstill. We had to cancel the initial schedule and reschedule it for another date with some changes.

The whole purpose of Ranji Bros. Productions venturing into short films was to ensure that quality content is created with technical perfection. Yes it is a short film, as the duration is ‘short’ but all other aspects in making it were similar to or at par with a feature film. That was precisely what we have been trying to achieve, we are happy that the output was on our intended lines. Kalki was my first venture, so there was no question of compromise. All thanks to the cast and crew of Kalki for their tireless efforts.

Yes, very much. It is in close alignment to one of the unfortunate cases that happened in Kerala a few years ago.

We had a cast and crew that was second to none – Harish Mohan (Director) helmed the project. This was his brain child and his second directorial venture.  Versatile actor Indrans who needs no introduction, played the role of Sankaranarayan. He was the cornerstone of our project, around whom we planned the premise of the movie.  Vineeth Mohan of Adi Kapyare Kutta Mani fame was also one among the star cast. Story and Screenplay was by Hari Rajan. Music was done by P S Jayhari. Editing by Pradeep Shankar while DOP handled by Reji Prasad

Kalki’s music creates a huge impact. Tell us more about it?

P S Jayahari was the man in charge of music. His music created magic and was one of the highlights of the film. We are happy that P S made his mark in the industry with movies like Athiran starring Fahadh Faasil.

During the movie, there was this scene where I was required to push Indrans chettan to the floor trying to snatch the knife from him. While the shot was taken, the impact of my push was so forceful that Indrans chettan fell and his thumb was hurt and bleeding. But he was extremely supportive, came over and told me that it was done well and was happy with the outcome.

Tell us about your production house Ranji Brothers and its future projects?

Well, it was in 2016 that I established the company Ranji Brothers Productions along with my brothers – Ritin and Rohin. We work as a small closely knit team. Finances, script selection, cast and crew falls under my umbrella, while Ritin and Rohin take care of the operational part, marketing, media relations, print and publicity. We have finished two more projects titled – Omana Thinkal Kidavo and Selling Dreams. The next in line is Marigold Padmini.

What are the factors which you consider while selecting a script and taking the final call?

Script is always the key, followed by the practical viability of the project, including budget. Execution is next in-line. We are open to new thoughts and out of the box ideas. I prefer working with a team that is sincere and open.

I would not prefer remaking a classic. Those are remarkable hits which are liked and accepted by audiences. I would not meddle with those classics that have given us fond memories to cherish.

Tell us your opinion about FILLUM and how it will help the upcoming filmmakers?

There are a lot of incredibly talented youngsters out there. FILLUM could be the right platform for them to connect and showcase their talents paving a path for them to the mainstream movie industry.