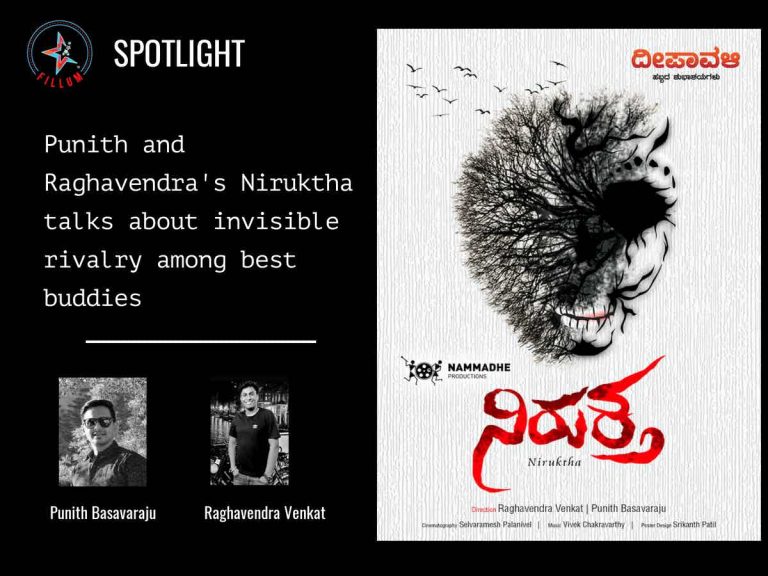 They are passionate about cinema and their dreams got wings at their workplace which encouraged them to make short films. IT guys Raghavendra Venkat and Punith Basavaraju, had a concept and they weaved a story around it with an incredible twist. The director duo talk about their films and tell us about dreams of making it big in the cine industry.

Niruktha has a gripping suspense and is impressive. How did you arrive at this story?

It all started when we decided to explore the sibling rivalry concept. Sometimes for various reasons siblings harbour hatred towards the other, we wanted to develop this concept. As we explored this further we felt that rather than siblings, the concept of friends, jealousy and hatred has more momentum. And the story could be given various twists and turns this is how we arrived at this story.

We both are into IT. The firm that we work in has a club, which encourages us to make films. Like-minded people are making films here. Complete support is given from different people who have similar passion. They even conducted a workshop for us. We learnt few things here. This inspired us at a major level. After that we were confident and wanted to try making movies and we started off with short films

One strong social message was what we were looking at and we wanted to show it in a commercial way so that it would be interesting. Some parents compare children, which could be detrimental. We wanted to highlight that too and say that everyone are unique in their own way.

The entire shooting was strenuous. Especially the shooting schedule. We finished the shooting in four days. It was shot in 2 weekends. The last weekend we were shooting for 48 hours. Every hour we were working on something or the other. Since we wanted natural lighting for the night scenes, we had to shoot at late hours. But everyone were good and helped a lot. There were some budget issues but we fared well. Even the girls who acted in the film supported us and had no qualms about late night shoot. They had immense trust on us. One of the lead actress was married and she gave us her full support.

We did eight months of pre-production work for this film. We have sketched each and every scene of the film. This has been our biggest plus point. We also got some beautiful locations and that helped massively.

Raghavendra: Frankly speaking this happened in my house. My sister felt this in a small way as she thought my father favoured me more. After the film released many people did say that we treat our kids with equal love, but they think otherwise. Some confided that they felt this in their office.

Punith: If you check the comments in Youtube there are many comments that say that they did experience such a thing. Maybe it happens somewhere in everyone’s life, but seldom do people develop hatred.

Ragavendra: Punith is one of the lead cast. Since he was there from the scripting stage it was easy for him to get into the skin of the character. The lady who played Niruktha does not know Kannada. Manasa played Chaya’s role and she has done it perfectly. Vishak is another actor who had a prominent role. Everyone played their roles perfectly. Selva Ramesh did the cinematography. He brought the camera for this film. Srikant did the promotions.

Punith: Acting was not that easy. Everytime I stood in front of the camera I was nervous. We were juggling all the while. Everyone helped out and it was great working for this film.

Your film music makes a huge impact. Tell us more about it?

Vivek Chakravarthy scored the music for this. We sat with him and briefed him. He gave us what we wanted, sometimes we had some suggestions and he incorporated them as well.

We had this car chasing scene. This happened at 2AM. Chaya was chasing Niruktha. Chaya was in a mask and she was driving a car and she bumped into a scooter. All the neighbours came out and said that they will call the cops. We were terrified and we left the place immediately.

We have seven films now. We wanted to take Niruktha to a bigger screen. But this won’t happen anymore. Keerthy Suresh starrer Penguin is on similar lines. So we have dropped this idea. We have 3-4 scripts, which we will start shooting soon. Also we plan to take proper training in filmmaking so we can master this art.

Raghavendra: I am huge fan of Dr Vishnuvardhan and in recent actors I like Sudeep. From a directors perspective I like Christopher Nolen. I watch very less movies and generally go by my instincts.

Punith: I am an ardent Kannada cinema film fan. Upendra has a huge influence on me. From acting and direction point he is different.

Initially we thought that it was just an app about films. But after downloading it we came to know that this app selects the best films. We like their intention. It gives opportunity to the audience to know who all have worked behind the movie. This makes the app special.