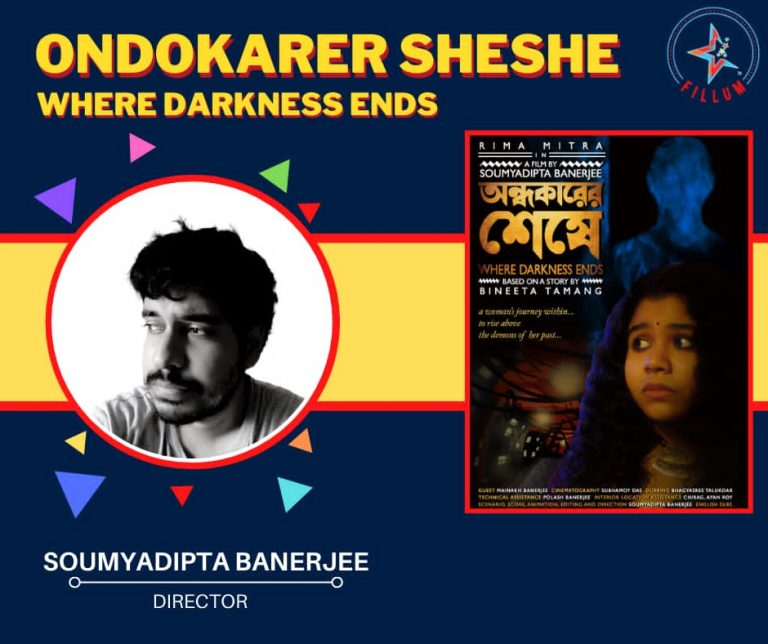 Director Soumyadipto Banerjee’s film is minimalistic in style, has simple setting and yet suggests so much. His film shows us the inner demons that a popular writer is fighting with and she wins. The director talks about his film in detail and also tells us why he made it.

To be honest, I had never really given much thought to the idea of making a film centered around women particularly before I came across a short story published in a popular daily newspaper some three years back. I had previously worked on a film with a strong feminine lead but that was primarily a mystery story with a psychological twist.  I was, however, on the lookout for story ideas with strong feminine characters in an attempt to break the usual stereotype of women being mere objects of romance. This particular story titled “Walking out the Door”, authored by Bineeta Tamang had a personal touch. It was the sheer loneliness of its central character, the fact that she was all by herself against the rest of the world that inspired me primarily. It was written in a very minimalistic style in a simple setting and yet could suggest so much, and it was the power of that suggestion that served as a great motivator. The author made a very true, honest and pure statement about how willpower can pull someone out of the shadows. And that is what we attempted to depict in the movie. Our top priority was to show that struggle, that painful battle within her with the demons of the past and how in the end, she comes out on top and wins her life back.

I believe that beyond the corporal segmentation of men and women, the highest and only truth is that of being human and being humane. More than a man or a woman or a transgender individual, we are humans firstly and lastly. We should be tested and judged based on our potential to serve our own kind, not on mere anatomical differences. This truth is a very basic and fundamental one and more and more people need to realize this and come out of their feudal shackles. Only then will the barriers break and empowerment of any kind will at all be possible.

I remember the day my mother was awarded the Ph. D. degree as a true celebration of the power in women. I was a fresh teenager then and I had been a witness to how painfully she performed the balancing act of caring for her family on one end and serving as a college lecturer and researcher on the other. And on top of all this pressure, she had been recently diagnosed with diabetes mellitus and had also suffered the pangs of T. B. So that very day when she received that certificate from the Hon’ble Governor of West Bengal was indeed a grand celebration of her womanhood.

I really do not have such personal icons, women or men, to be honest. I take inspiration from many people in many different fields. But in general, I believe women in academic and creative fields make the real difference in our society. Starting from internationally acclaimed scientific minds such as Marie Curie to Bengal literary sensations like Ashapurna Debi, these women constantly challenge the conservative rigidities of our society and bring real change.

As I said before, the physical and psychological segregations must cease. The greater truth of belonging to one race should be realized. Only then can empowerment of women be possible.