People identify me because of this film, says Akshay Vaskar - FILLUM 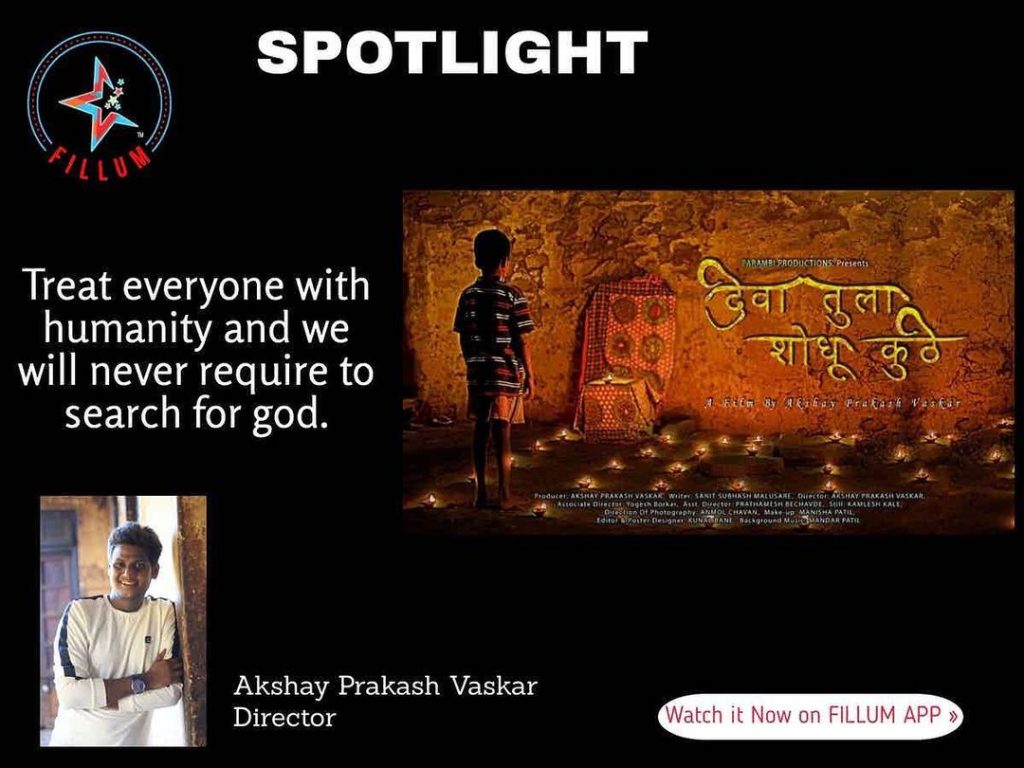 People identify me because of this film, says Akshay Vaskar

Akshay Vaskar began his career in films and television as an actor, but soon he realised that he was better off as a director. There was so much of creativity in him that was bursting to come out. Akshay took it slow and steady. He began with production work and then went on to become an AD. Now he is a full-fledged award winning director. The walk in the cinema lane has not been easy, yet he is loving every moment of it, he says.

Akshay talks about his film ‘Deva Tula Shodhu Kuthe….?’ and his style of film making…

How did you get this story?

Sanit Subhash Malusare is the writer of this film. A year ago he had given the script to some other director. I was looking for a good story and I spoke to him about it. He said that he has a story and that director has not worked on it. Now this story landed in my hands. This is how I happened to work on this story.

For the past eight years I had been into acting. The competition here is huge. In a serial called Laksha I played the villain’s role. I was not impressed. The pay was less and the recognition was slow. That is when I thought of moving into direction. I then started working in an acting academy doing a lot of odd jobs in production. Later on I started working as an assistant director. Some offers came in and I worked as associate director in three films and in two films as an assistant director. This is where my journey commenced. I did a short film called “It begins with me”. This was my first short film as an independent director and this got 45 awards.

Some people depend heavily on god. When they want something they start bribing the gods. We should work hard for what we want. God is within us and the efforts we put in will get us success.

What were the roadblocks you faced when you made your film?

After getting the story I have worked for six months on this film. The lead actor in this film is a child. I was unable to get the right child artist for a long time and this hassled me. In a film festival I saw a film where this child was cast. The director of this film introduced me to this child. I found my lead actor here.

The producer of the film backed out at the last minute. My mother came to my rescue and loaned her jewels and gave me the money to make this film. The third thing was the house is which I shot the film belonged to an old woman. On the second day of the shoot she refused to give me her house as someone had told her that she could get huge amount of money by lending her house for shoot. Convincing her was a big task. Yet I did it and we settled the issue amicably.

Every scene of the film was visualized by me. I have envisioned this film for a long time. Also my cameraman and editor were also good and they got in the desired effect. We are a group of young people and I got good support from them.

No this is not inspired by anyone and is purely fictional.

I have already told you about my DOP and editor. DOP is Anmol Chavan and editor is Kunal Bane. The little boy has acted in some films and the lady who acted as his mother is a serial actor. She is Punam Chandorkar and is an established actor. Others are also reputed stage actors.

Mandhar Patil scored the music for this film. Initially we wanted a small boy to sing the song as the lead actor was a child, but somehow it did not go well. The music director sang this song casually and sent it to us, so that we could finalize on it. We were convinced by his singing. The impact of Mandar Patil’s voice was perfect. Also this is the first time that he has sung for a film.

The recognition I got with this film is something that I cannot imagine. People identify me with ‘Deva Tula Shodhu Kuthe….?’. The image I have today is just because of this film. My confidence level is at an all-time high.

Loveship is a web series on which I am working on now. I am looking at making it to the national level with this one.

Sanjay Jadhav has had a strong influence on me. Duniyadari is his popular film. I have seen all his films and love his style of film making.

I am not confident about remaking a classic. That is too huge a responsibility.

I have seen how Fillum team works and I am extremely pleased with your promotion activities. Your OTT platform is sure to reach the top. This is a big boon to upcoming filmmakers.