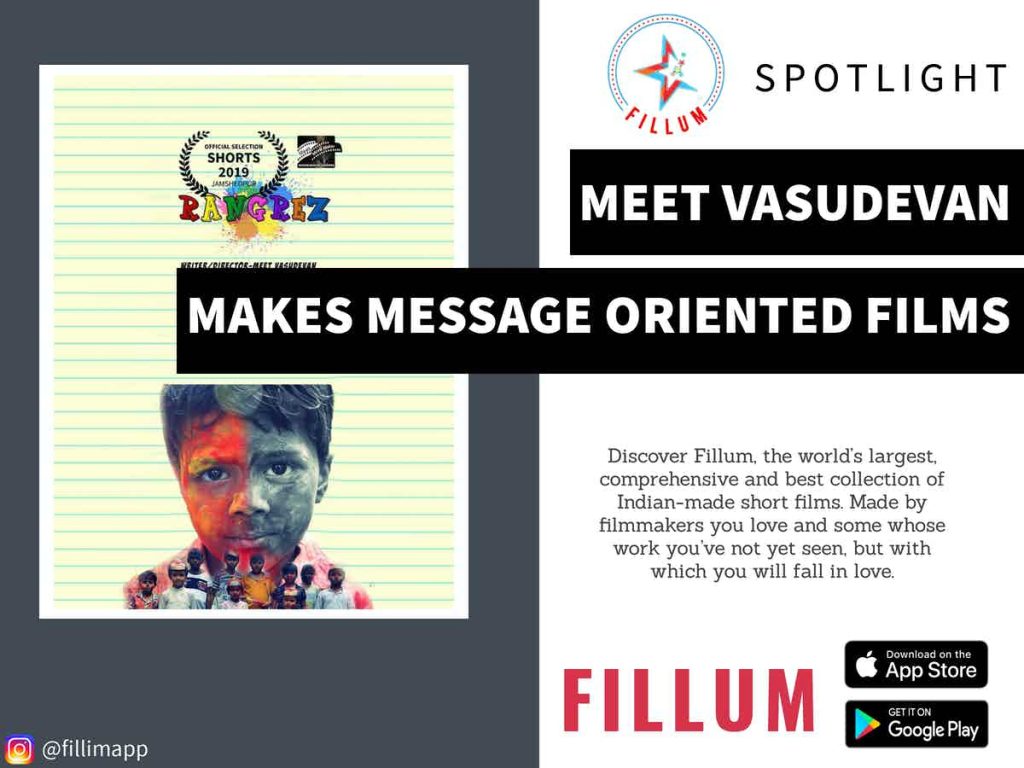 Meet Vasudevan learns and absorbs from the happenings around him. That is how stories take shape in his mind. His movies work because they have a message in them and are very close to reality. More importantly this director remains loyal to his thoughts.

Meet Vasudevan’s films have been a part of many film festivals and he has many films to his name. They include Darpan, Khoj, Rangrez, Parwarish…and the list goes on. The director shares his experience in film making and his lengthy collaboration with movies as an actor and director.

Generally your films come with a message or makes us think. How do you get the stories?

I am a keen observer. Whatever I do or wherever I go, I look for something. I keep collating the situations in my mind and what kind of message I can send. Spreading awareness is what I look for. Commercial and Bollywood kind of cinema do not interest me. My movies generally have children and poor people as its central character. I respond to what they go through with my films. People should be aware of the reality and I help them get close to that through my films.

How did films happen to you?

Acting is what I have been doing for long. I have been in theatre for 12 years as an actor. This started as a student. I directed a drama in school and it was a hit. Comics are my favourite and I learnt from there. It is a kind of storytelling and this passion towards comics taught me a lot. I hated my screen presence. The director in me says that I am not a good actor. Though I would be appreciated for my acting, I preferred directing. I did a short film and it was a huge hit. I learnt a lot from this. Hence I started learning about direction and thus went on to become a director.

What is that you want to convey with the short film Rangrez?

For poor people Holi is a colourless festival. The rich enjoy the festival, while the poor are worried about just filling their stomach any day. You can see political satire in this film as well. The boy gives 20 paisa coin when taking a ladoo from the temple. He did not want anything for free. The political party colour on the walls also does not impress him and he is not satisfied. Finally he gets Holi colours from a boy of his age. And eventually the little boy gets to celebrate the festival.

Has film making been easy for you? What are the problems that you face?

Getting a producer is a number one problem always for every filmmaker. Initially I did not get producers and I thought of making my own film. Also getting good actors was a problem. Now I conduct workshops and get those actors in my film. I have a group of producers and I just work with them. They understand me well and we make these films.

We see that your short films are on par with a feature films. How did you envision the same?

Most of my films have camera work by me as I have good knowledge about it. I have studied this subject. Location visit before the film and working on camera angles have helped me greatly. Before shooting I do the shot division. For Khoj I did the camera work and for Rangrez I had a DOP. I tell them the kind of emotions I look for. Till I get it right I keep working on it.

Do people relate to the films you make?

Many times. I have made a film called Khhawish. This was selected in many film festivals. People who saw it came to me and said how emotional they felt about it. Some even cried. This happened for the first time with me. In the film Khoj, which is a true story there are foreign actors. Some have said that they can relate to it as they know several soldiers who have not been helped by the Government. Rangrez’s story is very common, I have helped many poor kids during festivals in whatever way I can. I want realisation to strike in with my films.

Any unforgettable or cherished memory associated with Khoj and Rangrez?

In the film Khoj, the French Canadian couple you see are the main character’s children. They are from Montreal, Canada. This film was played in a film festival and they were very emotional about it.  When they spoke to me, I was touched. Just two months before this film released his father died. When he lauded my efforts it was a memorable moment for me. In Rangrez the child who played the role, needed good coaching. But when he performed one particular scene he pulled it off very well. I had my doubts initially, but this child surprised me. I was shooting in a busy street without any permission and was asked to clear off immediately. But the locals there supported me and the shoot progressed. This was a great moment.

During this lockdown period I have done two films and both are based on Covid19. I am doing a Horror film called Andheri Raat. Another film Abhineta is on an actor, who has lost his popularity due to an accident.  His plight will be shown in this film. We will also touch upon the suicides by actors that is happening in the industry.

Satyajit Raj, Akira Kurosawa, Vittorio De Sica. I like Charlie Chaplin as well and I read his biography and got carried away. His films have influenced me heavily. Sometimes I even feel that I resemble a lot like him (laughs)

These are the days of OTT platform. Theatres are closed and people are now watching films at home. So these platforms will push our films. Fillum will help us showcasing our films. Good films are shown on the platform and this will give good entertainment and knowledge to the viewer.