Manu's Vidhi says that everything good or bad is destiny - FILLUM 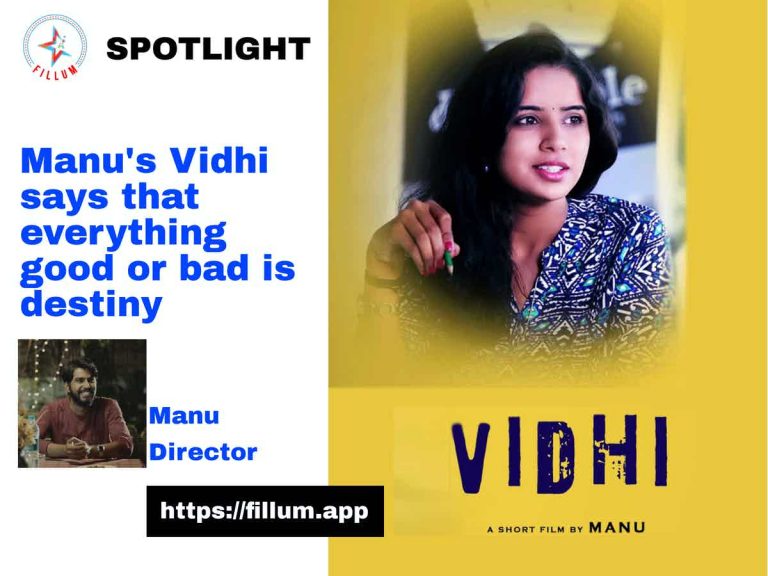 Manu’s Vidhi says that everything good or bad is destiny

Director Manu believes in seeing the goodness in a person or a situation. As a child when his mother told stories, he would envision the good or bad in the characters of the story. He reached to a conclusion that no human is good or bad, it is the situation that creates that feeling. Destiny plays its role brilliantly. In his film Vidhi too he has established this theory. Manu has not compromised in anyway when he made this film, that’s why it took a wee bit longer to make it, he informs us.

How did you arrive at the story of Vidhi?

I like stories that have life in it, this is the genre that I love. Thriller is my favorite as well. I wanted to blend these two genres and made this story.

Theatre is my first love and I have been in it for a long time. Back in school the claps and the adulation after performance fascinated me. I just wanted more of appreciation. When I had a story I wanted the world to know about it. I am associated with the Payana team, it is a group that promotes art. Audience in theatres are limited. Films reach to a larger audience. This pushed me to take up films.

People are not bad, it is the situation that makes us that way. In real life we don’t see villains. Each one behaves in a particular way because the situation demands that. So in a way everything is destiny. Destiny is a hero to some and villain to some. It is destiny that brought me here as well.

Oh we had our share of problems and it was never a cake walk for me. I almost shot for a year. Budget was the major issue. The quality that I brought into the film demanded more. We were running short of money always. Shooting happened at different times. So getting the same emotions and mood every time from the actors was my biggest challenge.

How did you get that feature film quality in Vidhi?

This is purely a work of fiction not inspired by anyone. But many people who saw my film could relate to some parts of the story. Couple of them have faced the female lead’s story.

Your film’s music creates a huge impact. Tell us more about it?

Music was scored by Abhinandan. Sounding was done by Indudhar. I gave Abhinandan 15 days and I was not very happy with the output. Then we sat together and we worked together almost for a month and got the desired effect.

After the film was done, we thought of releasing it in small theatres. We screened it in three shows. Some popular personalities came to the screening and they appreciated the film. This was a memorable for me.

We have our own Youtube channel. So we are planning a web series in Kannada and if everything goes well we will start shooting by December. The plan is to make this web series in various other languages as well.

What are the factors which you consider while selecting a script and taking the final call?

For me the story should be good. It should do all the talking and captivate the audience. Some films are close to reality and others are fantastic fantasies. But both need strong and relevant stories.

Who inspires you to give your best shot in cinema?

I love Puttanna Kunagal’s films. Steven Spielberg is a huge inspiration for me. He makes amazing films.

No, I won’t remake classics. I would rather watch it.