Kling Johnson's Special Gift is a film that educates us - FILLUM 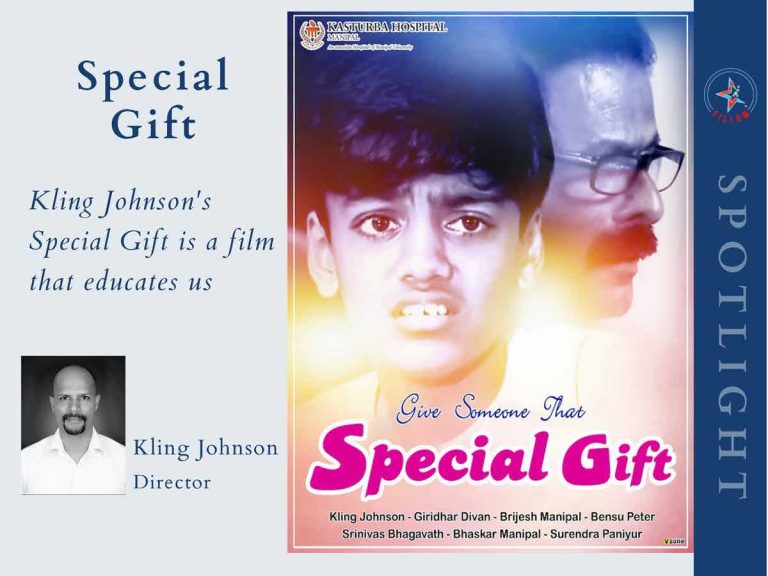 Kling Johnson’s Special Gift is a film that educates us

Director Kling Johnson is a multi-faceted personality. He was a movie buff as a child and it was then that he thought that he will act in films someday. Acting he did in many popular Kannada films and he also went on to write some books. ‘Cli the Clot’ is his popular book for children. Kling Johnson then forayed into direction as meaningful movies were his interest. Special Gift is his treasured movie that also educates us.

The actor-director talks to us about his message oriented film Special Gift.

Special Gift has an important social message. How did you arrive at this story?

The hospital where I work gave me a theme to make a film on organ donation. This was to release on Organ Donation day. I weaved a story on this theme and made this film. I work in KMC Hospital.

I was fascinated by acting from a young age and someday I hoped to become an actor. I acted in Rishab Shetty’s film Rikki. A small role came my way in that film. Then I nurtured an interest of directing a film. So this interest became reality with short films. Special Gift is my second film. Chocolate was my first short film.

It clearly is about organ donation. There are barriers on this is what people know. We wanted to convey that you can donate organs across blood groups. This is our important social message to the people.

What roadblocks did you face, when you made Special Gift?

We have brought in known actors in this film. Matching the dates of these actors was an issue. This delayed the film a bit. Apart from this we did not face any major issues.

The team that worked with me was one of the best. The DOP was one Mr Giridhar Deewan. He has worked in many Kannada films and is technically brilliant. I conveyed to him as to what I was looking for. He gave me exactly the kind of effect that I was hoping to get.

Did people relate to your film?

Yes, many people did relate to it. The film was popular on Youtube and also it was posted on Kasturba Medical College website. A small girl approached me and said that this was her story. Her mother donated kidney to her. A real connection was established here.

My DOP Giridhar Deewan was my biggest asset. He also scores music.  For this film too he has given the music. Most of my actors are from the Karavali belt. Raghu Pandeshwar, Sohan Shetty and Bhaskar Manipal are all popular actors. As I got these actors, I too became popular with this film.

Special Gift’s music makes a huge impact. Tell us more about it?

Giridhar Deewan scored the music. He gave the BGM as well. A song of two lines is there in this film which is sung by Abhishek Rao. He was the runner up in some reality show. They both worked on the music of the film.

This film has been shot in the hospital. It is all shot in real ICU. It was challenging to shoot when the hospital was functioning. Since I am an employee I was granted permission.

So far I have acted in five feature films already. They are Rikki, Edhu Yentha Lokavayya, Suji dhara and Nimmelara Ashirvadha. The last film is yet to release. I am also the author of ‘Cli the Colt’, a children’s book. My second book is on the way. I am also into subtitling. I have worked as an actor in about 15 films. Doodling is my hobby.

I love watching Malayalam movies. I get inspired by them, my writing and acting gets impacted by the films I watch. There is no particular actor or director as such.

There are so many films I love. Shawshank Redemption is my favourite and probably I would like to remake this one

Seriously this will be a great initiative. When I was informed about Fillum I just submitted my film. Later I realised how great your app is and how it will help all the upcoming film maker. My best wishes are with the team.