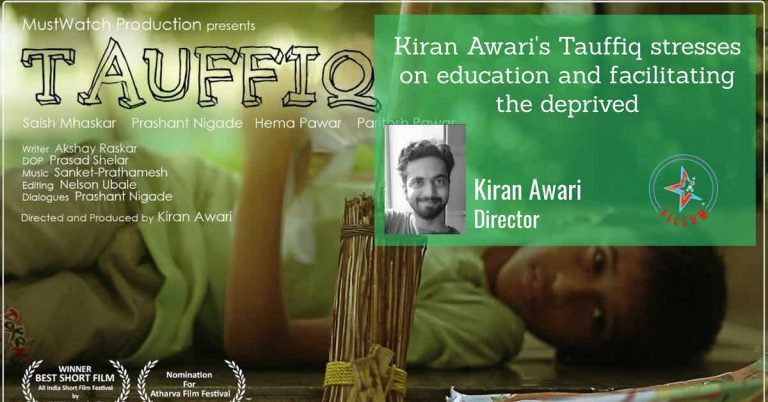 Kiran Awari’s Tauffiq stresses on education and facilitating the deprived

Kiran Awari’s film Tauffiq has a stark social message and is coupled with another important practise of giving away something that you do not need to the have nots. The director tells us that he made this film crisp and has seen that his message creates the desired effect.

How did this social message concept come in?

One of my friend Akshay came to me with this story. He had already titled the film Tauffiq. I am a theatre artist and am involved in street play as well. But I thought this concept can be made beautiful visually. So we thought of making a short film with this story.

Like I already said I am a theatre artist. By profession I am a textile engineer and I am into a full-time job with a popular textile company. That is my core profile. In college we did a lot of theatre activities. We have done many plays and I have acted in lead roles and won many awards too. We are engaged in all kinds of theatre activities. Building contacts was one thing that led to short film making.

Did you face any challenges while making Tauffiq?

Budget was not a big challenge for us. Getting permission for the location was a major challenge. We visited many apartments. Finally we liked Siddivinayak Sankul. They gave us permission. Our MLA helped us here. Shooting happened in July and this was rainy season. When we planned the shoot there was no rains. But when we started the shoot it rained. The shoot which was to happen in a day, took two days.

The main character Tauffiq is inspired by the writer himself.  But since he was focussed and studious he made it big in life.

We went to an acting institute in Dombivalli. They train kids in acting here. When we approached them we found this boy who did Tauffiq’s role. Raffiq is the person who played the father’s role. He himself is an actor-director. We took guidance from him. The dialogues for this film were given by him.

Music has been scored by Sanketh Patil and Pratham. They both do music for theatre and short films. We had lots of discussions and were looking for positive notes. The pieces were selected from his music library.

Any unforgettable memory associated with Tauffiq?

When it was raining heavily. We stopped shooting and we played games in the corridor of the apartment. It was a joyful moment for all of us. Everyone in the team participated in this game.

We have three short films ready on paper. Once we get time we will start the shooting. Also a script for a full length movie is ready. In future if I get a producer I will go ahead with this film.

Film makers who have influenced you?

Christopher Nolen is a huge inspiration. I haven’t used his style in Tauffiq, but in my second film Happy Birthday I have used some of his techniques.

If you get an opportunity to remake a film, which one would that be?

I would like to remake the Marathi film Agabai Arecha. This is my favourite film.

How do you think Fillum will help you?

This is a great platform. When I was told about it I was thrilled as this is what we were looking for. Our films will be a hit only if it goes viral. The reach is very minimal. But an app like Fillum will do this for us. India has lot of good content creators and Fillum will help them majorly.