She is the only woman (ghost) who fell for him. Kamal Prakash's film Highway Kadhali is love story of a human and a ghost. - FILLUM 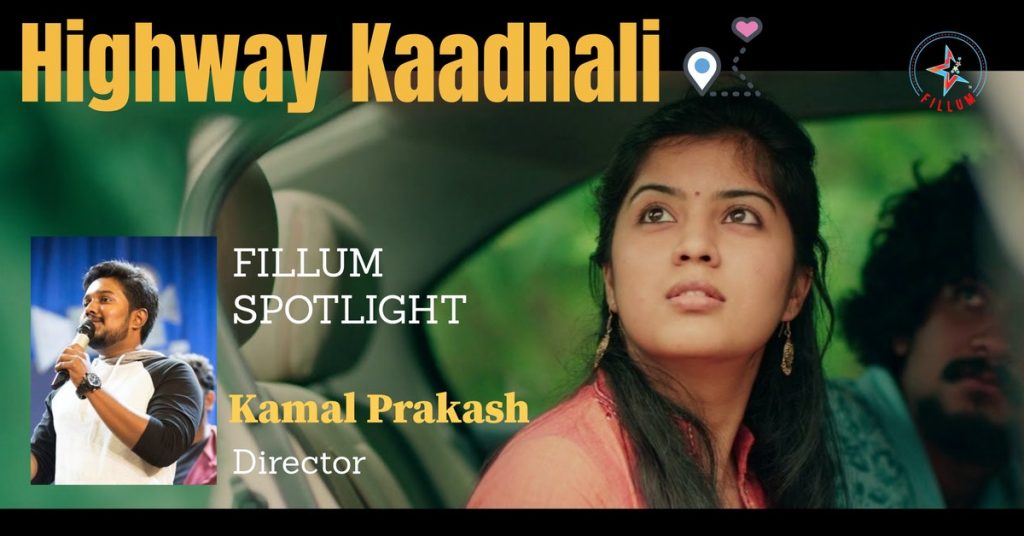 She is the only woman (ghost) who fell for him. Kamal Prakash’s film Highway Kadhali is love story of a human and a ghost.

Kamal Prakash, is a director who believes in perfecting every miniscule detail, that is why his short film Highway Kadhali looks more like a feature film. It’s a unique concept of a forever single man finding true love in a soul. Laced with humour, Kamal Prakash’s Highway Kadhali makes an interesting and fun filled watch. The director talks about his film and what he wanted to convey with it.

Highway Kadhali has a unique premise of a human falling in love with a soul. How did you come up with this concept?

There is one zone that each director might nurture and my such zone is fantasy. I wanted my story to have a fantasy element in it and wanted to explore this because of the fascination I had for mythological stories. Ramayana and Mahabharatha influenced me a lot, but it was Yama who intrigued me. I wanted to modernise this. So I merged technology with mythology.  Yama using technology was the thought here. Love was introduced here to make the concept interesting.

How did film making happen?

I am an engineer. I studied in a college which did not pressurise us with studies. They gave us the freedom of studying and doing what we love. Many cultural activities were there. And students made short films. I got into it. I learnt a lot and made a lot of short films. Everytime I made a film I learnt one aspect of film making. Highway Kadhali is that film, which would showcase my expertise in these areas. I took one year to prepare for all this.

What were you looking for in this film?

Highway Kadhali was supposed to be a Youtube film. I wanted to use screenplay-dialogue pattern for this short film. Which is generally done in feature films. Also I wanted to make this one viral.

The challenges that you faced with Highway Kadhali…

I had to concentrate on the visual quality, since this would be my showcase film in the industry. So we had to get in experts. Budget was a big issue. Getting Amritha’s dates was tough. She is a popular artist. Everything was down to numbers and budget and that was not easy. Shooting a road movie is a difficult task. The making aspect was very challenging.

Highway Kadhali is like a feature film, but with short time. How did you get that effect?

The idea was making the film in par with a feature film. So in order to get that effect we created story boards with minute detailing. Every scene was explained on paper. My camera man was very good and he knows how to shoot perfectly. I had the shots explained and ready, so we did not face any delays. Everything was planned and executed perfectly.

Are the characters influenced by anyone in real?

The lead hero’s character is a general reflection of almost 75 percent of the IT youth. They refrain from approaching a woman and remain single for a long time. This could be because they do not know how to approach or lack the courage. Other characters are a work of fiction.

Pradeep the lead hero is popular now, he is acting in feature films. Back then we were on the same page. He is good friend and a great actor. We are also from the same college and also made some short films. Amritha is a popular actor. She was seen in Bigil recently. She is a part of many feature films today.

Fazil scored the music, he is a close pal. I did not have much money so I wanted someone to fit in my budget. Fazil is in the industry for more than a decade and is quite popular. Music added a lot of weight to my film and gave it a feature film effect.

Loads of them… But one day almost everything went wrong. It rained and we waited and waited, nothing went as planned. That day we short for 40 minutes and could can one scene. So this is a lesson learnt for me. I should have cancelled shoot, but we waited and nothing worked out that day.

I am directing a movie. It is a GV Prakash film. We have almost completed 50 percent of the shoot. This film really has some good surprises. Now we have stopped shoot due to Covid issue. Expect a fun filled ride with this one.

Film makers who have influenced you?

There are many of them. Guy Ritchie and Edgar Wright are prominent. These guys have a visual story telling pattern that I just love. Ours is a dialogue driven movie telling. I am trying to achieve the visual way of telling the story. All top Indian filmmakers have influenced me.

For or against remaking film?

All films cannot be remade. I cannot take one-stand on this. For example a film like Pink needs to be remade. Because Pink did not reach the rural audience in Tamilnadu. It should be perfected to the taste of the Tamil audience. But a film like Vicky Donor should not have been remade. Light hearted films should be left alone. Films like Panchatantiram should not touched.

How will Fillum help movie makers?

It is so very professional. These guys are clear about what they are doing. Their cataloguing is perfect. Feature films and short films have been categorized well. It has good potential and especially will cater to the people in the US who are hungry for regional content.