What starts as a homedate lands these lovers in crisis. Vishnu Tharun's Kadhal Vaibhogam shows the things people do in love. - FILLUM 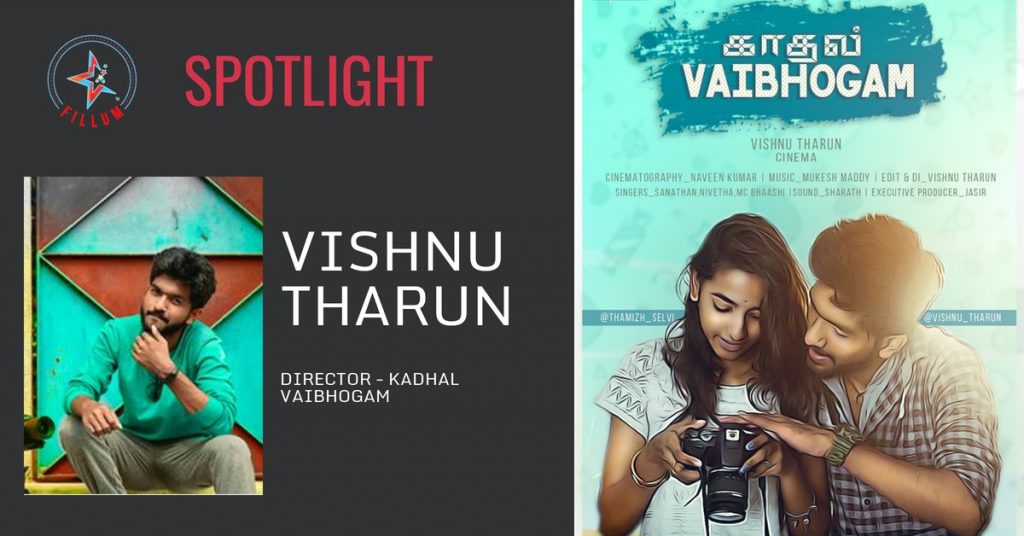 What starts as a homedate lands these lovers in crisis. Vishnu Tharun’s Kadhal Vaibhogam shows the things people do in love.

Kadhal Vaibhogam deals with a romantic home date concept. Director Vishnu Tharun says that lovers have different things in mind, they just want to spend time with each other and he has shown this humorously. A self-taught director, Vishnu shot this film in one day and hopes to make some full length feature films. The director talks about how he made Kadhal Vaibhogam…

Kadhal Vaibhogam is a fine romcom, How did you get this idea?

This is my third film. I wanted to make a romantic comedy. But with that I wanted to do something new. This might have happened in many people’s lives. So I wanted to showcase the home date concept, which is less talked about. But our approach was to make it fun than a serious film.

How did you foray into cinema?

I am an independent film maker and I have not got training from any institute. All my learning happened from Youtube and Google.  I have made some short duration films, like for 3-4 minutes. Kadhal Vaibhogam is my third film. My aim is to engage the audience and when I was confident about doing that I made a film of a longer duration.

What are you trying to convey with Kadhal Vaibhogam?

Love is a nice feeling and all of them need not culminate in sex. Lovers many times just want to spend time alone, have some fun and chat for long hours. This is want I wanted to show. Just because they are together people need not take them wrong. Sex is not ultimate. I wanted to tell this with a touch of humour.

What roadblocks did you face, when you were starting out?

Getting the team in place was my biggest challenge. Film is never a one man show. I had to get everyone is place, that was my biggest woe. And I did succeed. Finance was another problem, but my friends helped me out in this.

Kadhal Vaibhogam is a well-made film, how did you get that?

Whether short or feature film, the effort is the same. There is no separate rule book for both. I learnt about everything needed for the film and was prepared for this.  We took a lot of time preparing. Almost a year went by studying various things and only when we were confident we went about it. The thought that several years later when I watch this film I should feel that my film isn’t amateurish pushed me.

When I wrote it was a work of fiction. After writing the basic thread I spoke to several friends and they all started opening up about their love stories and we could relate. Most of them have faced such situation but the stories were varied. I accumulated these and improvised. Also I visualized what  would I do if I was in such a situation. I wanted to do something different, not the expected.

The actors and your team…tell us about them?

I saw the leading lady Tamizh Selvi on Instagram. I got a feel that she is a bold lady. We contacted her and told my idea, she was interested. She is a good actor and also gave some inputs to improve my film. My technical team was very small and they helped me adequately. Naveen worked on the cinematography and he did an exceptional job. Most of them are my close pals.

Music in your film…

Mukesh gave the music, he is my college buddy. He has worked in my other films as well. I told him what I was looking for and he merged it with his idea and we got what we were looking for. It was not a pressure filled work, every thing went smooth.

Any unforgettable memory while making the film?

I have so many of them. Mainly just before we started the shoot I could not sleep. Just a day before the shoot the leading lady had come to the hotel we booked for her. She did not carry her ID card proof. At 2am in the morning I had to travel several kilometres and get her settled. So both of us did not sleep and we were wondering, how will the lead pair act without any sleep? The next day I lost my iPhone. How will I contact my team? With god’s grace I found it and everything went well.

Definitely I want to direct a feature film. But before that I will make several short films. Right now I have collaborated with a production house to make a short film. This one will be on a large scale with good cameras and popular actors.

Many of them actually. I cannot stop at one. In India it is SJ Suryah, Parthiban and Alphonse Puthran a Malayalam film maker. I generally wait for their films. In world cinema I like James Cameron and Christopher Nolen.

Films should be original. I am not interested in remaking. There are lots of challenges in this. Firstly comparisons and whether we will do justice is the big question. It’s boring to remake and the magic of film making is lost here.

Digital platform for short films is a great idea. These are there for full length feature films, but very rare for short films. I think our film will get good international coverage. There are several short film makers and Fillum is a great concept for these films.