He lent unconditional support, when she told him the truth. Shriram Dhidaan's Uchcham Thodum Anbin Kodi talks about the importance of being there for a rape victim. - FILLUM 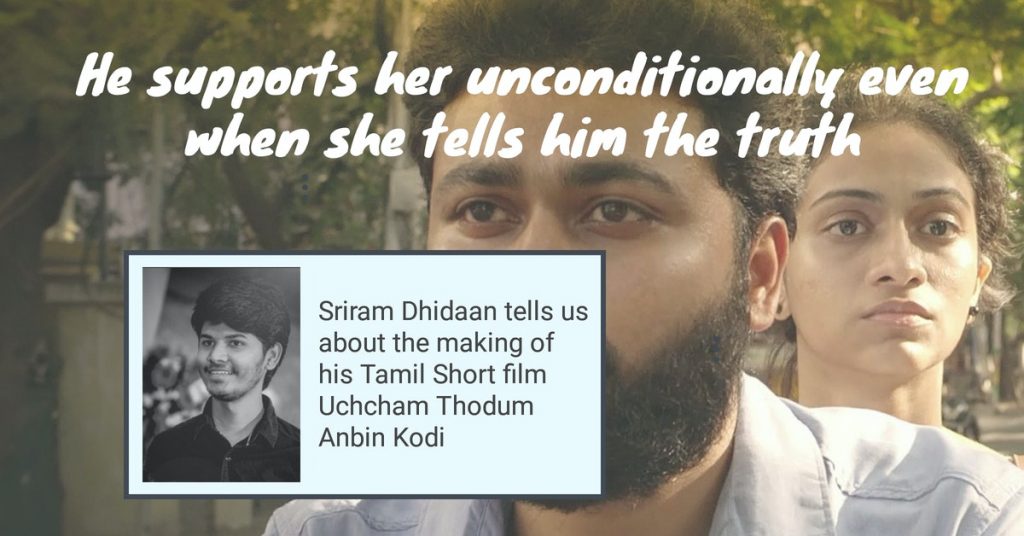 He lent unconditional support, when she told him the truth. Shriram Dhidaan’s Uchcham Thodum Anbin Kodi talks about the importance of being there for a rape victim.

This film story was a random thought

Short films will always be my priority

Sriram Dhidaan did not give much thought when he thought of the story line of his short film Uchcham Thodum Anbin Kodi. But later the director did realise that what he thought of was reality. It is a hard hitting film with a message. Sriram says that though making this film wasn’t easy, he did enjoy every moment of it.  Read to know more…

How did you get this story line?

It came as a random thought. I was planning another film and this line came into my mind. I developed it and made into a movie.

How did you get into films?

I was much interested in doing home videos. Editing was something that I was interested in. These used to be funny videos. Slowly I graduated into bigger videos. One day I just shot something and edited it as I think editing is very important. This was a small video and it came out well. This increased my confidence and I got deeper into this. Uchcham Thodum Anbin Kodi is my sixth short film and I did it in a professional manner.

What did you want to convey with your film?

Nothing actually. It was a just a film. I was not trying to convey anything. I did not want to underline anything. It was just my point of view.

Challenges that you faced when you made this film…

The film was shot in 18 hours. So everything had to be quick. The day portions were shot in one place and night in another. This involved a lot of traveling. I wanted to finish the film in just one day due to the budget constrain.

How did you get the feature film effect here?

I was already into editing and had worked in a web series so I had a fair idea. My camera man had good knowledge and he helped me greatly in this. We shot in red epic camera, which is used to shoot feature films

No. But after I wrote this story I spoke to many women I know. Some of them said that they these things do happen and they were aware of it. This especially happens in the rural village areas. I did have that thought somewhere in my mind.

The lead hero is my friend, who is a television actor’s brother. So this gave us some mileage. He is not a professional actor.  The leading lady is a popular face. She is seen in several Tamil ads and is a model. She has done a small portion in a film called Sarkar. The cameraman has worked in many feature films and he is well-known.

How has music helped your film?

The music was given by a Kannada music director. He is Satish Selvam. I told him my requirement. He is a friend and understood my ideas and gave what I was looking for. I gave him some reference music.

Any unforgettable memory from this film?

We had to finish the film in 24 hours. So we were running from here to there. That was something I can never forget.

More short films. Even if I get a chance to do feature films, I will always return to short films. I am working on a script and it will ready within a month. Once it is done we will start shooting.

Any film-maker has been a strong influence on you and your style of film making?

I am not trained in this profession. But I am influenced by many film-makers and that may not be seen in my films. I see films of all genres and pick a thing here or there. I look for reality in movies.

I am not against remaking. There should be a reason to remake a classic and if it is strong and convinces me, I will do it.

Filum is still in the budding stage now. If it reaches many people then I think it will surely go miles. It does have good potential, but again that depends on how popular it will get in future.