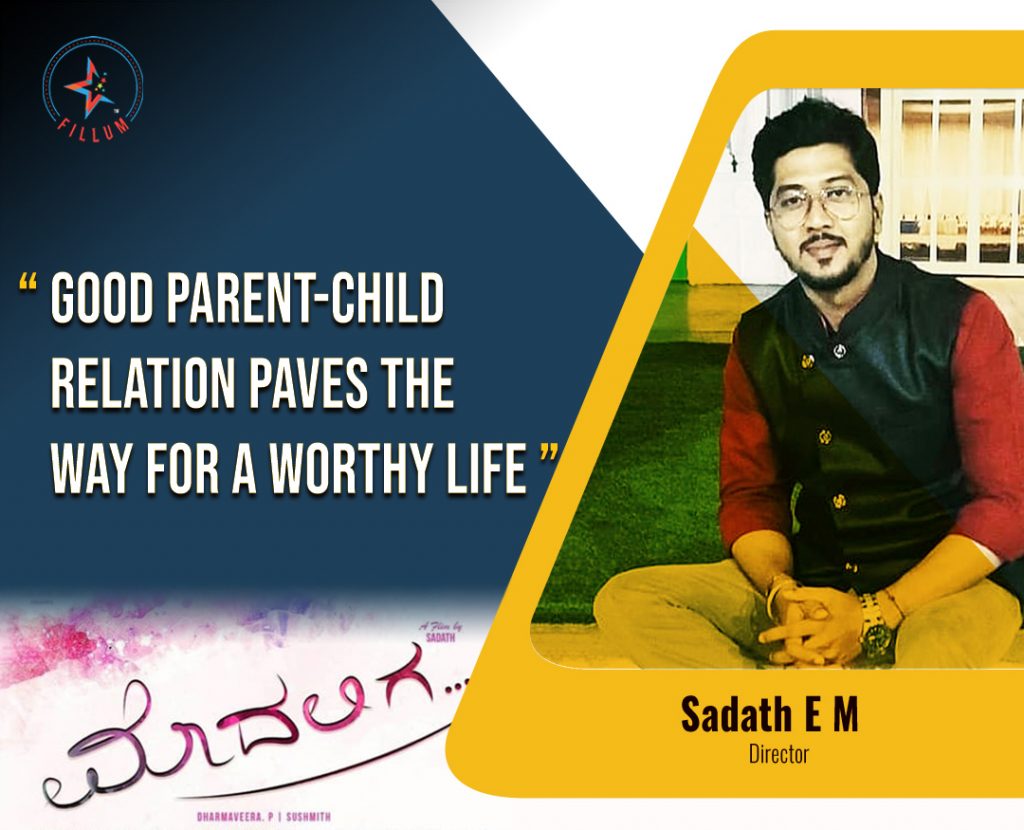 Good relationship between parents and children are vanishing, my film focuses on this, says director Sadath E M. This film is hugely inspired by his relation with his father and he also sends a message to the society through it. Sadath hopes to make it big in Kannada cinema someday. He is working on a feature film as well. Modaliga is his first short film.

In conversation with Sadath about his film Modaliga….

Modaliga deals with a friendly father-son relationship. How did you arrive at this story?

This is inspired by two happenings. My close friend lost her father to cancer and she was very close to him. I came to know about this several days after the incident had occurred. I was totally inspired by the relation they shared. It took a while for her to come in terms with what had happened. Also I am closely attached to my father as well. Based on these two threads I made a story about a relationship between a father and his child.

For me there was a tilt towards cinema from my school days. I am into IT and I work for a popular MNC. During my free time I pursue my interest in films. Writing scripts, Mad ads… all these are my areas of interest. I needed a platform. Modaliga is my first proper short film.

The relationship between parents and children are on the decline these days. I personally feel that parents should be friendly with their children. This generation wants that. Being strict won’t help. On the other hand, children should value their parents. We should create good memories with them. There is no point of reminiscing of what we could have done for them once they are gone. Make them feel loved when they are here.

Finance for the film was my major challenge. After the script was locked, I had no clue how I would cope with no money in hand. Many asked me what I would gain by doing this short film. But my friends came to my rescue. There have been friends who have contributed from Rs 50 to Rs 1k. They have all sponsored my film. You may see in the credits that I have written ‘Namma Kannadigaru’ for the producers. The biggest sponsors were Royal Heritage. Their contribution helped me a lot during the post-production work.

Like I have told you earlier my friend and her relation with her father inspired me a lot. My father himself was my motivation for this film. I have been observing my friend’s parents. Each one was different and there is a bit of them in my film. Some incidents like the snoring discussion that happens in the film is inspired by what happens at my home.

Sushmith is the lead character who played the son. He is in pursuing MS in Germany now. He is a happy go lucky person, playing an emotional role was challenging for him. Dharmaveer played the father’s role. He is a Central Government employee. I found him through Tent Cinema. DOP was Ramesh, editing was done by Varun, Supreeth and Hanumanth were the assistant directors. Sandeep Bhat scored the music.

We sat for the music for two days. I was looking for a signature tune, which Sandeep provided. The music of this film has been appreciated greatly. We have worked together and Sandeep Bhat has given me the kind of music that I was looking for.

I have loads of them. What comes to my mind now is, when I was finalizing an artist for the father’s role, I met Dharmaveer in MG Road, Bangalore. The story was narrated to him and I told him about the climax. He was silent for a couple of minutes. I saw tears in his eyes and that worried me. He said that he was reminded of his father. It was a very emotional moment for both of us. This gave me a positive vibe.

A feature film is on cards. For this I will be working on a short film, which will be like a pilot film to my feature film.  Sponsors are ready for this one. I am looking at shooting this professionally.

Puttanna Kunagal sir has been a huge inspiration for me. I just love Shankar Nag sir’s films as well. Upendra sir has been the new generation director who has influenced me a lot. S S Rajamouli, Yograj Bhat, Prashant …these are some directors whose movies I love.

Classics should always remain as classics. We should not touch that. But surely we can get inspired by them and learn a lot. I would never remake a classic.

For struggling directors this is a boon. I can create a profile here and showcase my films. This is a big thing for budding directors like me. Fillum is like the LinkedIn of cinema. A big blessing I must say.