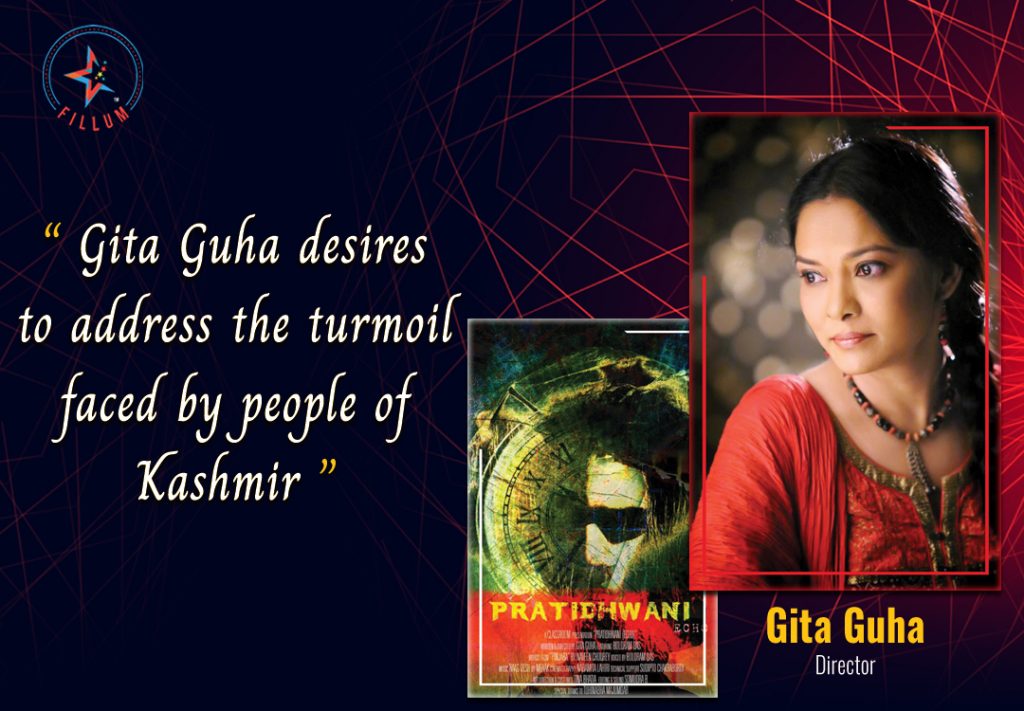 An actor by profession Gita Guha chanced upon filmmaking when the country was under lockdown during the pandemic. Making the film in such situation wasn’t easy for her, yet she accomplished it. Gita says that what we faced for three months is faced by people of Kashmir and other northern regions often when there is a political situation. She wants to bring out the inner turmoil faced by the people of this region. And for this she has also planned a sequel to her film Pratidhwani.

In conversation with Gita Guha…

How did you arrive at this story?

We are not isolated people. We have a social life. But my people from Kashmir have suffered this lockdown like situation from years. So many times they go disconnected from the world and their family. I was in lockdown for some months and I realized that if this situation has dejected me, what the plight of these people would be who are constantly in such state. I have read poetry on people who suffer such conditions. This made me think and I did this film. How does it feel to be disconnected from the world due to various circumstances? The situations could be political, pandemic or anything for that matter.

I am actor and into theatre. That is my profession and I just love doing that. Filmmaking is totally new to me. During the lockdown I was not working due to the shutdown. So I started looking deeply into films. Then I saw Anand Gandhi’s films and this provoked me to read a lot. I am a big fan and just love his films. I started taking his classes. There I understood the nuances of film making. I was supported by my friends a lot for this film.

Like I said earlier, it was not just the pandemic that can create loneliness and throw your life out of gear. Political turmoil and other situations in the country can also create circumstances, where one is completely cut from the world or his family. It is not easy to go through such condition is what I want to convey.

What were the challenges that you faced, when you made your film?

Challenges were there. It was a learning process for me. Storytelling in film is different than what happens in theatre. I had to learn a lot, from story board to all the technicalities of film making. There was confidence that I can do it, and I just did it.

My editor and cinematographer were professionals. Moreover I wrote everything clearly and made it evident about what I desired to see on screen. There was a lot of things I wanted to include, but all that was not possible. There were lot of limitations during the pandemic. I planned for more shots and I hope to deliver all these in the sequel of this film.

My team was brilliant. I had many FTII graduates in the team. The lead was played by Bolaram Das from National School of Drama. So many people helped me while making this film. The film was shot in monsoon and their help was timely for me.

Tell us about the music of your film?

The music was picked from Youtube. I saw what music suited my film and that it fit well with my film.

The entire shoot was unforgettable for me. I cherished every moment of it.

I have a couple of stories which are ready. The sequel of Pratidhwani will be made and I plan to shoot it in Kashmir. The sequel will give a clear picture as to why I made the prequel. I am very keen on this. There are plans to make satirical films showing the sad state of affairs in our country. Also I am planning to work on Tamil poet Varavara Rao’s poems.

Anand Gandhi’s films have influenced me a lot. He is my biggest influence and I am trying to follow his philosophy.

That is tough. Remaking a classic is a huge challenge. I think I would love to remake Bengali film Subarnarekha by Rithwik Ghatak.

This is a great platform. It gives me immense satisfaction when people watch my film and ask me what my next project will be. This is a big boon to newbie filmmakers like me.