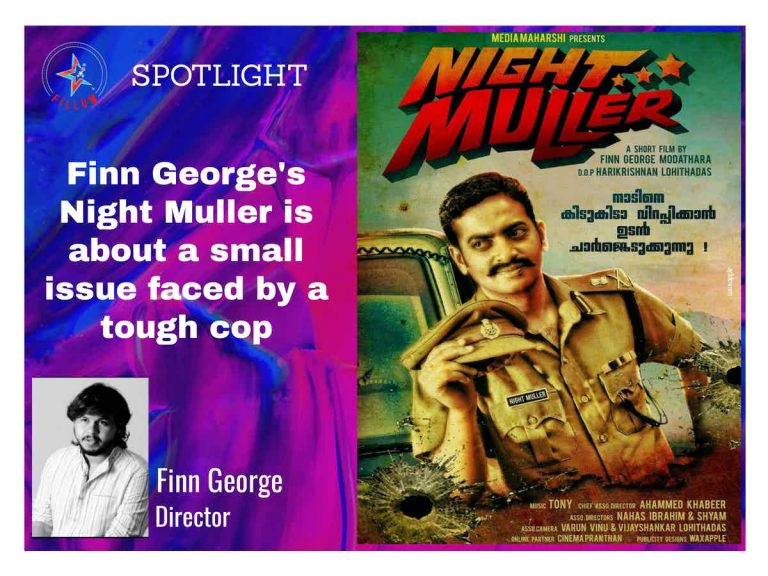 Finn George Varghese had no inhibitions when he wanted the world to know what he faced as a child through his film Night Muller. He put it subtly with a dash of humour. The film was appreciated by many and made him popular in the film circles. An editor by profession Finn George has made some short films. He wanted to unleash the creativity in him and that is why he pursued films, says Finn.

A chit chat with Finn George…

This is an unusual film. How did you arrive at this story?

This is partially my story. As a small kid I used to do this. When I was once travelling in a bus from Chennai to Cochin in between I napped. At some point I woke up and I had a feeling that something happened. Bed wetting happens in childhood and I weaved a story around this. What if this habit continues even after one gets married? This is how I formed the story.

After my school, my interests were in Animation. I worked as an animator in Dubai. I was looking at satisfying the creative person in me. Clerical jobs did not interest me as it was mechanical. My creativity was trying to break free. This was the time when VFX was entering in the film industry in a big way. My thoughts were that film making will help me unleash my creativity. I joined a one year course in Chennai. Now I am completely into editing. My talent for animation got lost somewhere.

This is my debut short film. I write a lot of short film concepts. I wanted to convey some emotions with my films. Making people laugh is a difficult. This was the emotion that I wanted to show with Night Muller. This film has made many people happy, they have seen it and called me to convey the same.

There were not any major roadblocks when I made this film. The story was in my mind. I told this story to my brother and my mom. They laughed so much. When Saiju Kurrup agreed to do this film I was over the moon. I had my doubts if I will be able to pull it off because I am an editor not a director. That was my major block.

I was determined that I should made a good film. My cameraman was Hari and he is a close friend. Since Saiju ettan was in this film I had to get the best out and I could not think of settling for anything mediocre. So we got the best into this film. For many who worked in this film it was their first experience.

Like I told you earlier, this story is based on my childhood. But after people watched this movie there were many who related to this. Couple of my married friends said that they faced similar issues. I do not know what exactly happened but this has happened to them. Some even asked me if this was my personal story.

I owe a lot to Saiju ettan. He heard the story and agreed to be a part of this film and he was happy hearing the story. It was a one day shoot for him. The DOP Hari is my close friend. They come from a family closely associated with films. His ideas were insightful for me. My chief associate director was Ahmed, I owe a lot to him as well. Ifti is the music director of this film. The child actor is actor Suraj Venjaramod’s son. Mother’s role is played by Anitha and she is from KPAC.

Your film’s music creates a huge impact. Tell us more about it?

Ifti scored the music. He was not the initial choice. We had given it to someone else first. I sat with Ifti as it was my first film. We worked together on it and got the final product. It has come out well. We have worked for a couple of short films together after that.

My film did not make it to any film festival because of its genre. But Night Muller became viral. People started recognising me because of my film. Many stars have watched it and this is very memorable to me. They recall me and remember me for my film.

Since I am into editing I have edited a lot of short films. Last year I won the Guinness World Record for editing the longest documentary. This is known as 100 years of Chrysostom. We interviewed 100 celebrities for this including Prime Minister Narendra Modiji. This was my biggest project. I have some plans for OTT. Very soon I will shooting a short video for the Independence Day. I hope I get permission to do this.

Who inspires you to give your best in cinema?

This is a tough question. I get inspired by so many things and people. Recently I saw Thapad and I was so very inspired by it. This is my kind of movie. My elder brother is a huge inspiration for me. He wanted to get into films, but my family did not approve of it then. He is my biggest critic. If he says no to a project I completely drop it.

There are so many classics that I love. Not that I want to remake them. That would not be my cup of tea. Rather I would love to enjoy them. But there is this Tamil film Thevar Magan, which I would like to work on in my own way.

Tell us your opinion about FILLUM and how it will help the upcoming filmmakers?

I am glad that there is now an app for short film makers. This is a very good move. There are OTTs for feature films and web series. Many good short films are getting lost on Youtube. Hoping that your selection process is good and if people recognise it then audience will know where they can find quality content in regards to short film.