He has several love stories...Deepak Reddy's Manasanamaha has an interesting backward flow of memories of a youngster's love lives. - FILLUM 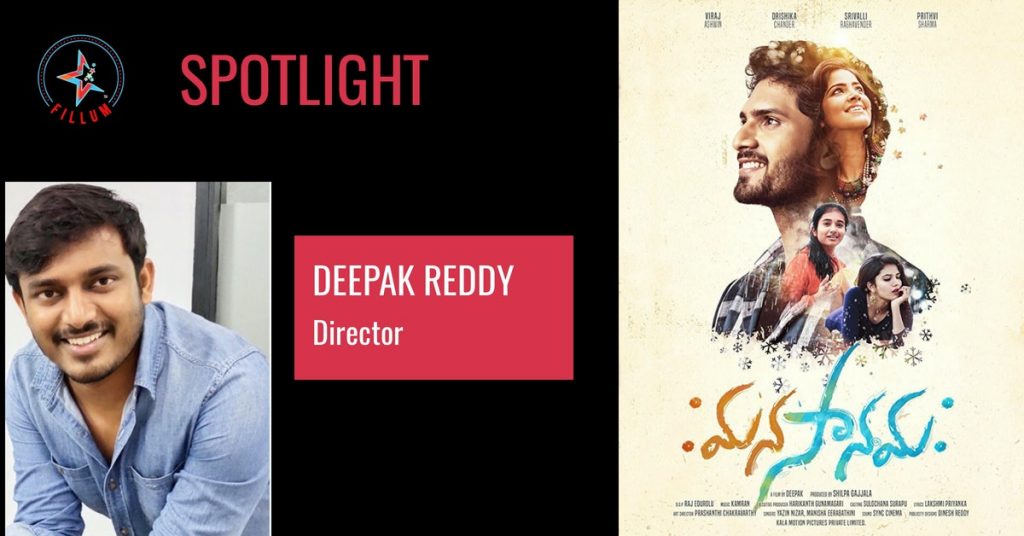 He has several love stories…Deepak Reddy’s Manasanamaha has an interesting backward flow of memories of a youngster’s love lives.

Deepak Reddy is one of the few directors who executes a film, just as he has envisioned it. Manasanamaha is a lovely film, with a different pattern of storytelling. He just wanted to do a demo film, but his charismatic approach in films resulted in the brilliant Manasanamaha. The director tells us in detail about his film…

Manasanamaha is a brilliant film, tell us how this story took shape?

We’ve always seen that most of the love stories end up in a happy note. But it need not be happy as we do not know what happens later. I wanted to work on this point. I just wanted to break this stereotype. Beginnings are always happy. I wanted to end the film in reverse. Like start from the ending and move to the start. This was supposed to be a five minutes film. As I started developing the film it got bigger. I added other elements to it as well.

Was entry into films a passion nurtured for long or it just happened?

I have no filmy background, but I do have friends and cousins in film distribution. My family was not all in support for this as well. I was testing waters. I am a fan of Ram Gopal Varma. I didn’t want to be an Assistant Director and as he suggested I just went ahead to do a short film. But that did not happen then. Then I moved to the US for masters. I got a call from Sekhar Kammula’s team. I have worked in his film in the art and production department. Now I was ready, meanwhile I started studying the industry and then went ahead and made this film.

Is it easy to make a short film?

Challenges were many. Explaining this film to my crew and cast was the biggest test for me. I tried my best in making them understand. This is a backward flow of story and they trusted me completely. For them it was like we have failed to understand the concept, but you lead us. I did a lot of homework and only then went to shoot it. Conversion from paper to onscreen was tedious. Also the pre-production work was cumbersome.

We shot the film with a regular camera. I have specifically worked a lot on the colors in this film. I did not compromise on anything as it was my demo work. Every minute detail in the film was worked on. I had very good clarity about everything. If there was no clarity I would not execute it.  Earlier I wanted to shoot the film from an iPhone. But it had some limitations. There was no compromise of the quality.

Have you drawn inspiration from real people?

The story is fiction, but the particular character has been inspired by me. The guy tells the story. It is happening in its head. Everything is told from his perspective. He too makes mistake. I have made this guy look good, which need not be that way. That’s were fiction came in. Nevertheless at the ending we have started the girl’s thoughts. That is the essence of the film.

Tell us about your team…

After a lot of homework I decided what I was looking for. So many auditions happened as many did not understand what I was saying. The lead actress is a trained artist in theatre. The male lead is a seasoned actor and he has done a feature film. The second leading lady is a Dubsmasher and she fit perfectly into the role, and has a good voice that impressed me. Rest of the crew have supported me well. They were not experienced but the blindly trusted me and believed in this project. The post-production work was done in our own studios. Even the producer Shilpa Gajjala gave me a free hand. A lot of women have worked in this film.

The film has beautiful music…what are your thoughts?

Kamraan gave the music for this film. He is very talented. The music enhanced the film to a different level. We sat around for four months to get the perfect music. I shot the film and came to him. He gave two three tracks and I was not impressed. Then he gave me what I was looking for.

Tell me those memories that are unforgettable?

Loads and loads of them. All the trouble I took. Most of the shots are single shots and taking this is not that easy. I wanted to put the audience in the hero’s mind. Reverse shooting is very complicated. We have to be very careful and it was not easy. Shooting this film has been unforgettable. No one wanted to act in my film initially that put me down, but I did not stop.

Definitely I will do more novel short films. Right now I am penning a script for a feature film. It is kind of an extension to this short film and will be a different story altogether. I want to make films of different genres and do anything that excites me and put it on screen.

Stanley Kubric is my all-time favorite. I like his way of story-telling. Alfred Hitchcock too has had a huge influence on me. In India I like Telugu filmmaker Sukumar, Gautham Menon and Rajkumar Hirani.

Will you remake a classic? If yes which one would that be?

No… never. I don’t believe in remakes.

It is a great medium. I see that the people associated with Fillum are passionate about films. This app will help lot of filmmakers grow. The app is also good. So many films on one platform. We will help you grow and you will be doing that to us. I am glad that my film is the first film on your platform. It is a very innovative app.