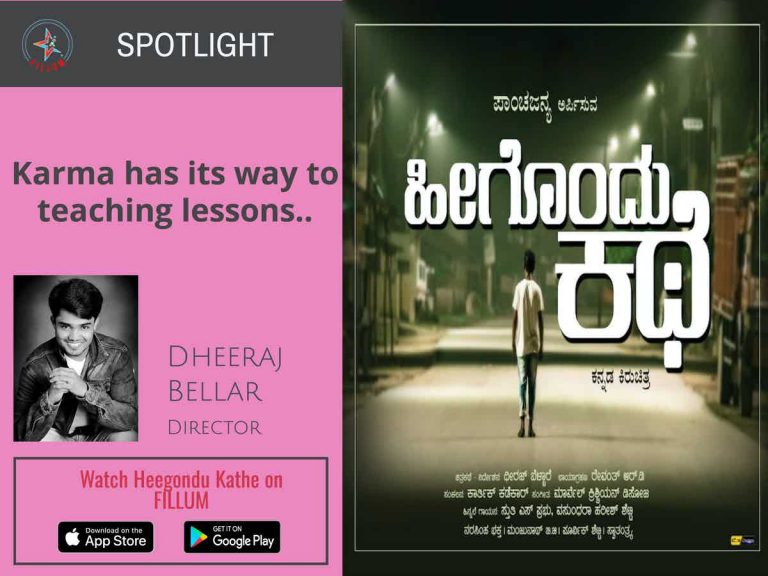 A professor by profession Dheeraj Bellar’s film Heegondu Kathe is unusual with very less dialogues. Music and visuals do all the talking. He has noble thoughts of people reaching out to each other when in need. Definitely he is not here to change the world, he says, but every human should do his bit to make this world a better place…

A talk with Dheeraj Bellar…

How did you arrive at the story of Heegondu Kathe?

Generally I don’t sit to write stories. I think about various issues and during this thought process this story occurred to me. When accidents take place we don’t really seem to be bothered. But what if this happens to someone close to us. This provoked me to write the story of this film.

Tell us about how film making happened to you?

By profession I am a Kannada professor at a college. I have theatre background and I am interested in acting. If I am into acting it will be only me, but if I am into direction I can get many people to act. That is why I moved into direction as well.

If you see my film I have put a message in the end. Life is a journey and all in this journey are our comrades. We should recognise everyone in this journey. When an accident happens we don’t bother as we do not know the person. That should not be the attitude. We should help anyone and everyone who is in need.

What roadblocks did you face, when you made this Film?

I wanted my film to be different, so I decided to show my film without any actors. This was not huge budget film, so I did not face any big challenges that I can think of.

A story was there with me and then I decided to make a film of it.  My friend Revanth (the cinematographer) and I tried something different. We did a lot of experiments and it was a failure. So after some trial and error we arrived at this and the effect was created.

Many people did tell us that they left people on the road who met with accidents. So they could relate to my film. The story is not far from truth.

All in my team are my students. I wanted them to get exposure. Several boys came in and supported me. Karthik did the editing and did his work for free of cost. Camera work was done by Revanth.

Your film music makes a huge impact. Tell us more about it?

The first song is from a drama. I felt that this might suit my film. One of my students sang it. The other song was sung by another student of mine.

When this film was out many people appreciated me. I come from a poor background and when many people lauded me, my parents were ecstatic. This was a great feeling.

One of my short film ‘Illige The End’ released recently. This film is about drugs. Another Tulu feature film ‘Shakalaka Boom Boom’ is also ready. I plan to do more short films as well.

Akira Kurosawa’s films have had a huge impact on me. From Kannada cinema it is director Upendra. I love the kind of the films that he makes.

My film has had limited reach through Youtube. I cannot imagine that my film will get an international reach through this app. For me this is a great news.