She sees people in her dreams...sometimes she meets the dead. Arun Prakash Jaja tells us about her dreams in his film Aura. - FILLUM 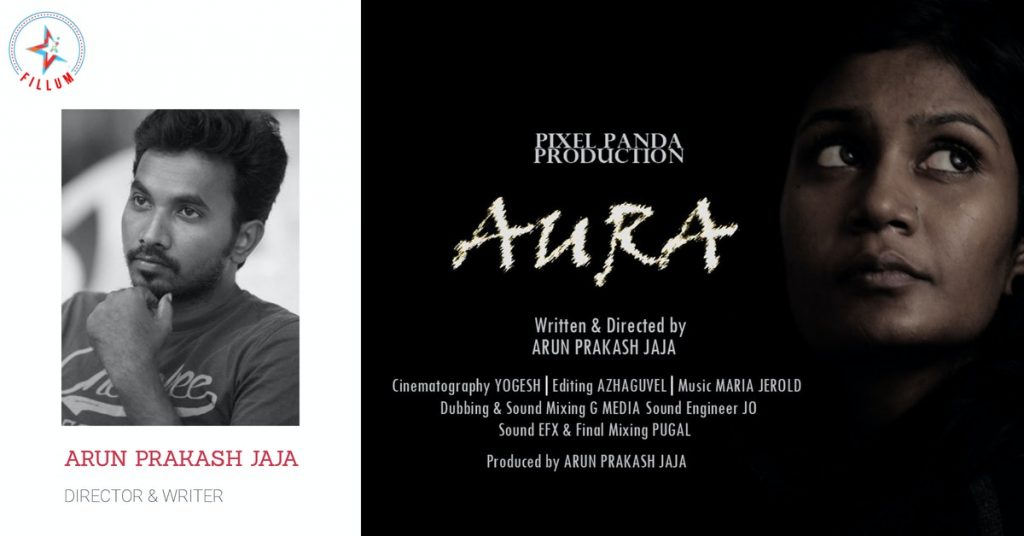 She sees people in her dreams…sometimes she meets the dead. Arun Prakash Jaja tells us about her dreams in his film Aura.

Arun Prakash Jaja was lured into the thought of film making at a very young age, his creativity never let go of him and the urge was getting stronger. After working in some feature films, his first short film Aura was made.

He has tried to make this film perfect by giving meaning to everything in this film. Influenced by an incident in his life, Aura took birth. Arun talks about his film and his plans.

Aura has a totally different premise, tell us about it?

My mom passed away on my birthday. I used to get recurring dreams about her. I started studying visions and its technicalities. I started writing about them and analyzing them as well. Filmmaking was going in parallel. We just wanted to do a short film and since I had this dream sequence in mind, I used this one.

How did this foray into films happen?

I had no knowledge about film making when I started. I am from a middle class family. Filmmaking is not something that my family would approve. But we love watching films and we discuss it a lot. From childhood I was exposed to a lot of films. I hoped then, that someday I would make a film and tell a story. Then it was a distant dream.

As I was studying I took part in inter-collegiate events. I made my team perform and we won. Later we won in many events. So here I came to know that it is possible. This was my first push towards films. I started working in the Ad industry and then a designing studio, where I met many directors. Then film opportunities came knocking. I worked as an assistant director and Mouna Guru happened in 2011.

What did you want to convey with Aura?

I was not thinking of conveying anything. It is just a film with a kick in the end. Also I wanted to portray what the working girls think and the problems they face. She has come from rural Tamil Nadu and is insecure. What happens in her mind is another thing I wanted to depict.

Was it easy ride with Aura?

No, not at all, it wasn’t easy. Budget was the biggest challenge for me. I was hell bent on paying everyone who worked for me. I did just that. Even the auto driver was paid. It was limited budget but we pulled through.

I wanted a dusky face as the girl is from rural Chennai. With not many contacts I had no luck. The person who played the doctor has done many short films, he suggested the leading lady. She readily agreed to play the role and understood the role perfectly. She was great in the rehearsal and emoted well.

How much do you think has the music helped Aura?

After editing we started putting effects in to. I was very specific with the sounds in the film. I have played with the music and sounds so that the audience feels it. We have enhanced the film with it. Initially there is no music, it all comes in the second part. It conveys the mysterious feel of the movie. My thoughts about music in this film have worked well.

What is that memory about Aura, which is unforgettable?

Once the film was complete and released, it was accepted well. I was happy and went on a Singapore to my friend. I could tour and also work. I worked as a labourer there and interacted with people. It was an experience of a lifetime. When the second month was to end, I got a mail that my film was selected for Chennai short film festival. This one was very exciting for me. I did not expect this at all.

I am not keen on short films. My focus is feature films. I have been writing a script for the past four years. I am taking time to shape it perfectly. I have registered with the writer’s union and once I am through I will approach producers with the script.

Any film-maker has been a strong influence on you and your style of film making?

I think others have to tell me after watching my films. But I am ardent fan of Stanley Kubrik. Aura has a feel of his film ‘Shining’. This director is called the greatest of great. My quest is why is he called so? I analysed his films and now I know why. I am highly inspired by him.

I love so many films. My mind is flooded now, but I would go with Fazil’s film Kili Pech Kekawa. Mammootty is the leading hero. This film is so very unique, I would like to remake it. Infact I will totally change it.

It is a very good initiative. Many films are going unnoticed. Your app will help them. It will be encouraging us. People from other countries need to watch all those beautiful films that are ignored. I think this app will bridge all these gaps and give international exposure to our films.

Could you please provide Social Media Handles for yourself and your team – Cast and Crew to help promote Aura?