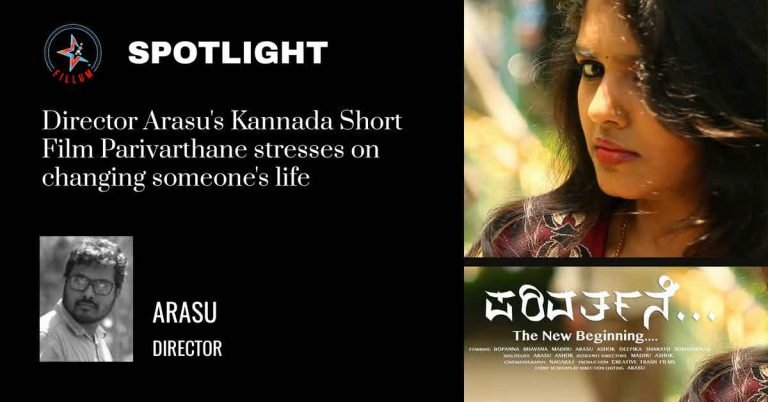 His love of becoming an actor pushed him to make films. When some actors refused to act in Parivarthane, actor-director Arasu took the onus and played the lead role in his film. And the final outcome was unimaginable.  Appreciations poured in for Arasu. He is a video editor by profession and hopes to make it big in cinema. The director talks about his films and future plans.

Parivarthane has a concept of hunger and winning over it. How did you arrive at this story?

My first short film was Sevaka. I wanted to make a film with a different concept and message. I saw many people like the lead protagonist on the road. They are not beggars and they do small jobs to make money. So this concept came into my mind. I developed on this.

Video Editing is my profession. I always wanted to be an actor from my college days. Routine life was not something that I was looking at. I used to interview celebrities and make some programs, when I was working with a channel. I have done animation and multimedia course, and also learnt editing. That is when the short film concepts started. A team was made and we started working in this.

I wanted the world to know the plight of such people who want to live decently, but people were not helping them in anyway.

What roadblocks did you face, when you made Parivarthane?

When I had this story ready. I contacted some popular artists. They refused saying that this was an old concept. My goal was to bring out this issue. Also location was a problem. We need permission to shoot in the park. I was also the actor and director. So I had to act and then check if the shot had come properly. We completed the film in 4-5 days and basically shot on Saturdays and Sundays.

Proper pre-production work was done. I made story boards of every scene. For short films generally story boards are not made. But we did that. Several rehearsals were conducted. All this helped. First we used to shoot in mobile and had a reference and then did the actual shoot.

After the film was released many opined that they felt emotional about it. Someone called and appreciated my film highly. Later the appreciations increased. This is just a story that popped in my mind.

Parivarthane’s music is good. Tell us more about it?

We do not have a music director for this film. Already prepared music pieces are available online. We picked some of them and purchased them. The big challenge here was that to get the perfect piece that will gel with our film. It took two-three weeks to get the music piece.

The appreciation that I got and the emotional connect that many people established with Parivarthane was my most cherished moment.

I am working on a script of a feature film. As I have no godfather in cinema I have to work hard. Also I have a family to run, so I will take it slow. Some short film scripts are ready, I have to shoot them. Apart from this I will be acting in a couple of Kannada films.

Kamal Haasan has a good influence on me. I love the way he makes his films. He is a person who makes films differently and with complete pre-production work. He also does rehearsals and all paper work is perfect. Vijay Sethupathi is another actor whom I admire.

We short film makers post our films on Youtube. But the reach here to the targeted audience is limited. In Fillum, the movie is reviewed and the best of the lot is selected. This is a very good concept. Also our films will get good reach. Audience will get good options here.