Appachan goes to meet his love, but is late by a day. Senthil C Rajan's Present Tense explores the intricacies of love. - FILLUM 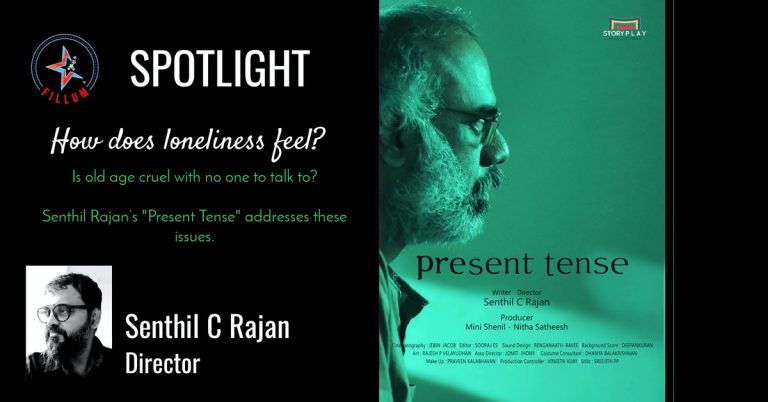 Appachan goes to meet his love, but is late by a day. Senthil C Rajan’s Present Tense explores the intricacies of love.

What is like to be lonely? Is old age cruel with no one to talk to? Senthil C Rajan’s Present Tense addresses these issues. He combines them with some subtle romance and the film leaves us with an ache as the protagonist misses his love just by a small delay. The director tell us about this film and his journey in cinema and what his future plans are…

Present Tense has an emotional concept that is touching. How did you arrive at this story?

It started with a basic thought of portraying loneliness. I thought of making a film with music, but then my thoughts were that visuals should convey what is in my mind. I know of a person who has a similar character. He used to talk, but my lead character is silent. My writing is inspired by this character. Keeping him in mind this story came to my mind.

I am into ad films from last 10 years and have made many such films. I have done a feature film as well in 2017. So I am a well acquainted into this cinema scenario. I have done a couple of short films, some of three minute duration. I wanted this film to be something different. I combined two genres, family drama and love and made Present Tense.

For me it was just a story, I was not trying to convey the plight of some old people. But after the release of the film, I came to know that there are old people who face this issue of loneliness. I just wanted to do something different and it was for my friend Sujith who is the lead actor in this film.

Did you face any challenges, when you made Present Tense?

We could not get the perfect house for a long time. I was worried if Sujith would look like an old man. He is younger than me and I did not want any makeup on him. The only makeup used is the eye shadow to make his eyes look dark.

We see that your short film is in par with a feature film. How did you envision the same?

I wanted everything to be natural. If you see the daughter-in-law whom we can hear, she was dubbed by an artist from Kollam. That was done so that everything seems natural and local. The kid’s voice were from a brother and sister from Ernakulam. We were fortunate to get that house. I was looking for a particular kind of house and our chances were good we found the right kind. The window is very important in this film and I found exactly what I was looking for.

The lead character is Sujith and he is my childhood friend. He was into local acting. We friends meet on weekends and another friend suggested that I take Sujith for this film. That is how he became a part of this film. The entire technical team and I have been associated for a long time. The editor is Suraj and he is known in the industry. The DOP has done two feature films. Renganath Ravee is the sound engineer. He has done more than 100 films.

Present Tense’s music makes a huge impact. Tell us more about it?

Deepankuran has scored the music. He is the famous musician Kaithaparam’s son. We have very good communication from six years. I told him what I need, which is a new sound. There has to be silence as well. A single instrument which supports the film is what I was looking for. I thought of clarinet and train sound. The instrument used here is Gasu and it is a wind instrument. It was with him in the studio and I listened to it and it excited me and worked well.

Yes I do have cherished memory. This is the only film where my mother visited the sets. I have made so many ad films. I can’t forget this moment.

I am into 3D graphics. Jayaraj sir with whom I have worked saw this film said that this is my genre. He opined that I should make such films but not from commercial point. Now I am planning a different kind of web movie. I am in talks with producers for this.

My interests have always been with Malayalam cinema. It is Jayaraj sir to an extent who has influenced me. TV Chandran has had a huge impact on me. I like the way he portrays something in a new style.  I need to watch international films as well.

I had my doubts initially as to how this app will work. But I know that this app will create some new wave. When we get everything under one place, we surely will go to this place. So this concept might make your app sustain.