Anuj Ramachandran showcases the complexities of minds in Eka - FILLUM 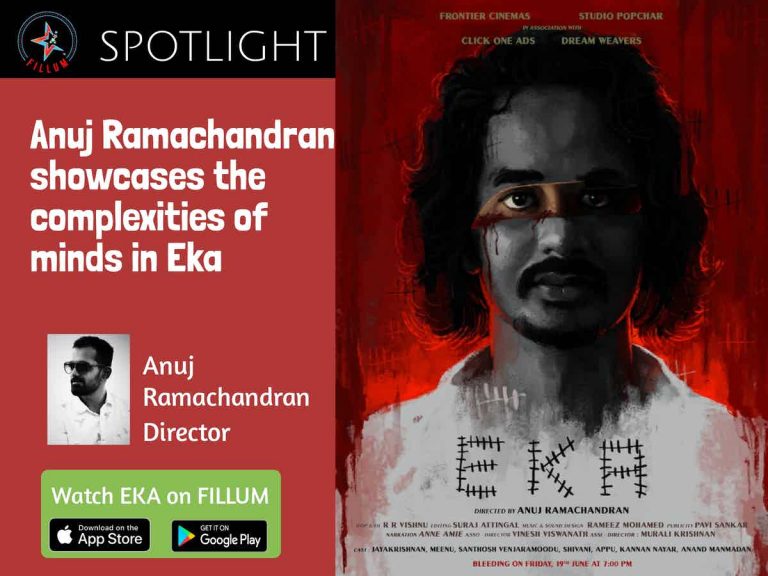 Anuj Ramachandran showcases the complexities of minds in Eka

His film Eka takes you by surprise and you will revisit it for sure. That is what Anuj Ramachandran intended when he wrote this film. Complexities of minds holds his interest and he loves to explore this. Anuj Ramachandran has gone with multi-layer writing approach and slow motion technique. Luckily for him both have worked. The director talks in detail about his kind of films and how Eka was made…

Eka takes one totally by surprise. How did you arrive at this story?

Actually this story is from one of the story collections in Google. It is from 100 short stories to be precise and this one is “I hated it when my brother Charlie had to go away”. It stunned me. It had a haunted feeling to it and I wanted the audience to feel similarly. I always liked psychoanalytic stories like this.

Tell us about your journey into films?l

I had no connection with film industry in anyway. As a child I was not movie crazy. But suddenly, during graduation, I was drawn to this medium. I attended a short time course on theatre arts and film aesthetics. That changed the course of my life. My mentor Vayala Vasudevan Pillai guided me and assured me that I had it in me. I was in a confused mode in life then. At last I found my path and here I am.

I have had this fascination towards the mind-set of people. I wanted to explore this as to what is going on their minds and what is actually shown to us, as them by them. Many of my films revolve around these topics. Eka is no different from that. It focuses on darker sides of human psyche.

What roadblocks did you face, when you made Eka?

The film was shot during lockdown. So we were forced to shoot it indoors. I had plans to shoot it outdoors and that could not happen.  We shot the entire film in two days with minimum crew and budget. Luckily I had an excellent team.

This is a well shot film. How did you make that possible?

Like I said earlier I wanted the audience to get glued on to what they see. It should be short, precise and engaging. I wanted to deceive the audience with purposefully placed visual clues. It is like you watch the film and get a particular feel and in the climax the perception changes. I prepared sentences that had multi-layer meaning. So, once the audience sees the movie, they should be compelled to re-watch the film. In the second watch the entire movie will give you a different feel and will be more meaningful. Also, the film was shot in slow motion for the audience to get maximum detailing out of it.

Did anyone relate to the film?

Lots of comments have come in. My film has been interpreted in different ways. To my surprise there are real life cases like this. Life is stranger than fiction.

Most of them are seasoned actors. The actor who played the brother is not an actor. He is working as an assistant cameraman in the industry. I convinced him that this character will be good and might open various possibilities for him. He went with my conviction and just took one take for every shot. Other actors have experiences in films and theatre. RR Vishnu is the cinematographer. Suraj Attingal is the editor, we have teamed up for all my films.

Your Film music makes a huge impact. Tell us more about it?

Music was scored by a Rameez Mohammed. He is actually a choreographer. Rameez has good beat sense and the music came out good. Actually he wanted to experiment and has done an amazing work. This is his first independent work as a sound designer and music composer.

We wanted to make the film as cruel as possible. We show a dead rooster in Eka. The killing was to be shown. We could not do that. Everyone in my team refused to do it. At last we tied it down and spilled blood over it to make it feel dead visually. Now the rooster is living with me at my home. It has some hens for company.

Since 2014 I have been planning films. I have 3-4 scripts ready. Everything goes smooth initially and my projects get dropped suddenly for various reasons. Right now I am writing a full length feature film for a renowned filmmaker in Kerala. The plan is to work in some films and then make my own film. I am also planning a parallel film, which is a triangle love story.  Again this one will also be based on minds.

Thazhvaram. It is a perfect movie. But I want to explore it in my own way. Raw, primal behaviour holds my interest.

I have been looking for good platforms for my short films. On other platforms the reachability is limited and their target audience is different. Fillum is a good option for filmmakers around the world. I hope that this app makes it big.