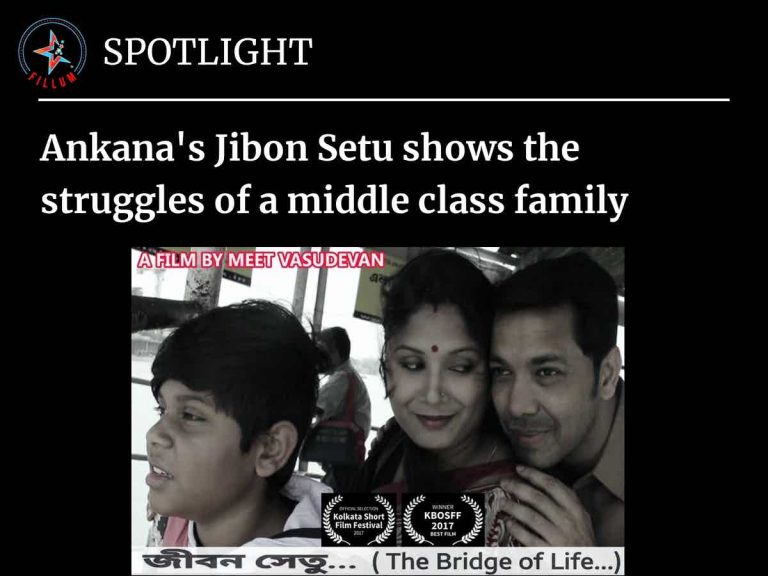 Ankana has played an important role in Meet Vasudevan’s film Jibon Setu. Basically she is a writer and this is her first film as an actress. The actress says that she loves films with a message and would explore writing than acting. The actress in her is glad that she was a part of Jibon Setu. She tells us about her film and more…

This is my first film. I am a writer and have never acted in films. I have always worked behind the camera. I started writing for short films with some encouragement from Meet Vasudevan. I used to assist him and he asked me if I could act. Also I have received some training in his workshops.

You have acted in Jibon Setu, what is that you wanted to convey through this film?

It is a story that could happen with any family. We should try to avoid conflicts in the family. We never know what can happen at any time. Also we should be careful about the words we utter. It can come to haunt us sometimes.

What challenges did you face while this film was made?

There were several problems. We had to shoot when the bridge had collapsed. I was shocked when I saw the damage that had happened. Initially I was shaken. There was a shot in front of the bridge in the film and I was not aware from where the shooting was happening. We took a lot of risk while shooting it as well.

Did people relate to this film?

I know of a family who survived this bridge collapse. They saw the film and said that it was god’s grace that they survived this crash. They felt that the bridge scene was what they went through.

How was the response to this film?

It was well received and this film has even gone to many festivals.

Do you think short films have a future?

Yes definitely. I think there will be a time when people will prefer short films over feature films because of the length. And those who don’t like song and dance theme will surely go with short films.

What is the main difference between feature and short films?

Which actor has inspired you a lot?

I am heavily inspired by Ayushman Khurana. Aamir Khan has also had a huge impact on me. They select different types of stories and do different kinds of film.

What is your favourite genre?

Comedy. But the film should be message oriented. I have never tried humour as it is difficult to make people laugh.

Any cherished memory associated with this film?

I would not call it cherished but every time I think of this film I recall the bridge collapse. It is a bad memory I must say.

What are your future projects?

I want to move away from acting for good. I would like to concentrate on my writing and work behind the camera. Rather than focusing on myself I would like to focus on a good story and make others act. I am working on stories on lockdown.