Aneesh S Sharma's Vaddaradhaka beautifully depicts the plight of parents when the birds in their nest have flown away, leaving them alone - FILLUM 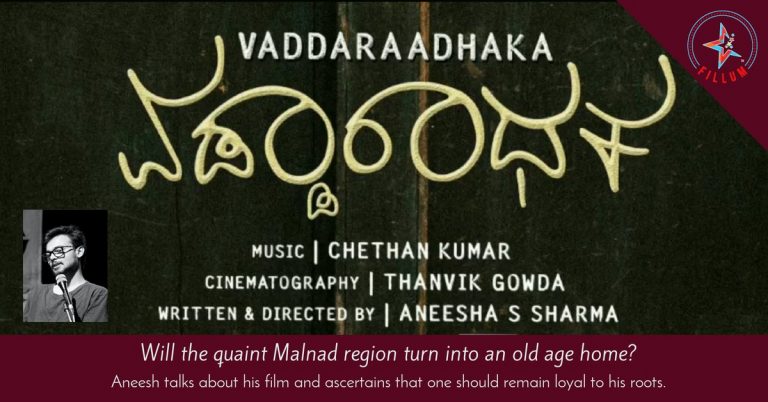 Aneesh S Sharma’s Vaddaradhaka beautifully depicts the plight of parents when the birds in their nest have flown away, leaving them alone

Will the quaint Malnad region turn into an old age home? Youngsters are moving away in search of good life leaving their parents in the villages. Who will look after them? Aneesh Sharma’s Vaddaradhaka gives food for thought and Malnad has been captured at its best. Aneesh talks about his film and ascertains that one should remain loyal to his roots.

How did you get the story of this film?

Sagara is my hometown. We were on a constant look out for a good story. Once I was travelling from Udupi to Sagara and it was then that this story brewed in my mind. I wrote the script in the bus itself. The very next day we shot the film. All the characters in this film are from my family. The film was shot in two days. We did not use any artificial lights and shot the film within the golden hours.

After finishing my 10th, I started studying visual arts. It is a five year course and it is a degree in painting. I got many offers from art department. I worked in many other departments and also film making. This is how my interest grew. I am not officially trained in film making, but I have learnt something about it.

What are you trying to convey through this film?

People should stay loyal to their roots. We can earn money by moving to different places, but it cannot give you happiness. In Malnad most of the houses are locked. This is a huge issue. If people move away, who will stay here and take forward the culture and essence of this place.

What challenges did you face while making this film?

Challenges were there. What I have learnt in film making and what I have made is different here. This is a film without any script. I just played with what I had. This short film has given a huge experience to me.

How did you get a feature film effect in this film?

Making of the film was what did the magic. Presentation of a film is very important. I have concentrated heavily on this film and I try to strive to give the best presentation in my painting as well. Also we have tried to be different and that has worked in this film.

Any real life inspirations in this film?

I have penned many stories. All my stories are influenced by something that has happened in my life. Work of fiction is not my style.

The main characters of the film are all artists and my family. They are Yakshagana artists and have done many dramas. All I had to do was explain the story and they would give amazing performance. Our technical team had two important people Chetan Kumar and Tanvik Gowda. Tanvik did the cinematography and Chetan scored the music. Three of us aimed to give the best and we kind of competed with each other.

Chetan Kumar scored the music. I sat with him and gave suggestions and that is how the music was created. We used many instruments at different places.

Cherished memory associated with this film?

I have learnt a lot from this film. When I made Vaddaradhaka I never thought of what kind of reception it would get. I saw the first cut on the phone and was impressed. Some people who saw it also liked it. But when I posted it on Youtube, within 2-3 hours my film got 25k views. This is very memorable for me.

I enjoy film making, but I don’t wish to make a film for commercial success. I will continue to make short films for my happiness. This is a beautiful canvas and I can compose anything here.

Satyajit Ray is a huge inspiration for me. His simplicity was his strength and I realized this fact when I saw his films. He is the director who showed me how important it is to make simple films without pouring in huge budget.

I will never remake a classic. I cannot play with someone’s story and perception. Rather I would concentrate on my story and work.

There is barely any encouragement for short film makers today. Many think of what returns they will get. Such platforms will help the film makers immensely. Apart from the time limit there is not much difference between short films and full length films. Fillum will surely be of a great help for film makers like us.