Ancestral gods must be revered and not ignored. Dina and Gana talk about the repercussions of ignoring gods in the film Neppra Nala - FILLUM 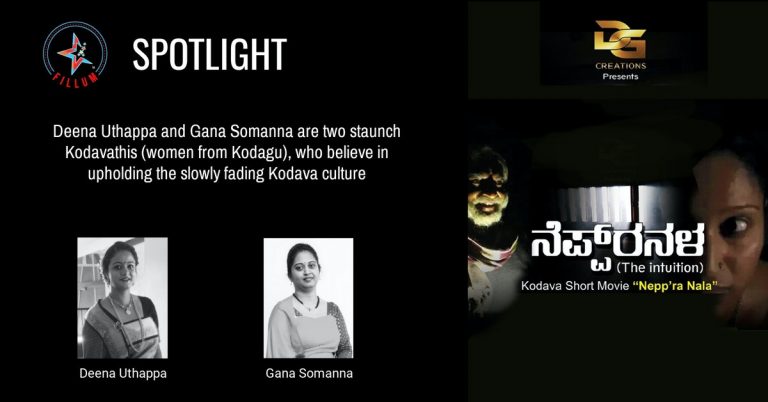 Ancestral gods must be revered and not ignored. Dina and Gana talk about the repercussions of ignoring gods in the film Neppra Nala

Deena Uthappa and Gana Somanna are two staunch Kodavathis (women from Kodagu), who believe in upholding the slowly fading Kodava culture. There has been a threat to the age old beliefs of this community, thanks to people moving to different lands in search of better life. One must not forget their Ainmane (ancestral home) and Karanava (ancestral gods) is what Neppra Nala stresses on.

A chit chat with Deena and Gana …

How did you think of this story?
This story was not what we planned initially. We had something else in mind. We were scouting for locations and went to this Ainmane. When we reached there and saw the ancestral house, this story came to our mind. In half an hour we had the entire story ready and were in great zeal to do this film. We even thought of the characters of the film.

How did the cinematic journey commence?
There was a concept of the importance of having emergency hospitals in Coorg. Initially we shot a small film with a camera. Since this topic was hot in our region the film became a success. We put the film on Youtube and got more audience. This was not made for money. The response for the first film was good and that in turn got us sponsorship and help from many people.

What are you trying to convey with Neppra Nala?
Kodava community is very small. Many of them migrated to different places. Now the authentic Kodava population is limited. A generation ago coffee and pepper revolution happened and focus got diverted from the Kodava tradition. People started moving away and they even lacked the time for the annual event of worshiping the ancestral gods. We thought that this needs to be addressed and hence we took on this subject. After making this film, some of them did tell us that they are getting back to these kinds of worship. We have a responsibility towards our community and this is our way of giving back to our community.

Were there any challenges that you faced while making this film?
So many of them. Last year it rained heavily in Madikeri and this was the time that we were shooting. The Ainmane was completely filled with water. When we sorted everything, one of the actors refused to come to the location at the last minute. We brought him to the location and had to shoot because the cameraman was available only for some dates. It was a tight schedule of two days. All of us slept just for one hour. We were also worried about how our community would react to our efforts.

How did you visualize to get the feature film effect in Neppra Nala?
We trained the actors. Everyone was given the dialogues and asked to learn everything. Expressions were taught while shooting. Cameraman helped us a lot.

Any real life inspirations in this story?
Yes. There have been several incidents where the ancestral gods have visited their people. This phenomenon has been seen by many. When we checked with so many Ainmanes, they did relate and said that they have experienced this phenomenon.

Tell us about your lead cast and technical team?
The old man’s role was played by Nervanda Umesh. He is a known actor. When we contacted him for some actors, he requested us to give him a role in our first film. The leading lady Rinni is a Kodavathi and she was doing Tiktok videos. She readily agreed. The leading man is Deena’s cousin. Cameraman is from Yatna studios, Mysore. They helped us a lot in making this film.

Please tell us about the music?
Bharath scored the music. We requested him for the kind of music that we were looking for and he gave us exactly that.

Any unforgettable memories?
Many people told us that this topic could create problems. What if it does not go well with the ancestral gods? This has happened and there was a worry at the back of our minds. But thankfully everything went smooth.

Your future films?
We have so many films. Deena is working on a community related short film. Nothing is concrete about short films as of now. But we will be looking at different subjects.

Why Fillum?
We are glad that such an app exists. Your team is trying to get all Indian regional languages under one umbrella. Kodava community is a small one and our Kodava film is going global with this app. This means a lot to us, we are proud of our effort and are grateful to you.

One Comment on “Ancestral gods must be revered and not ignored. Dina and Gana talk about the repercussions of ignoring gods in the film Neppra Nala”