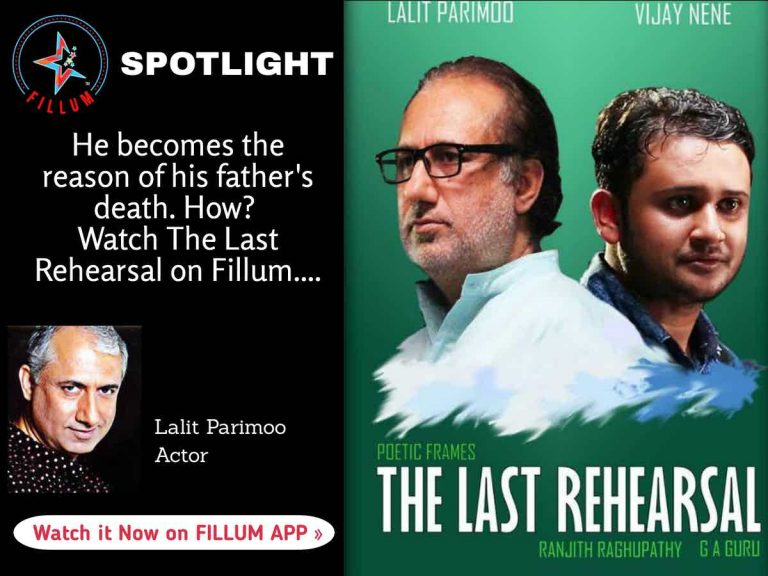 Lalit Parimoo is a persona who wears many hats, he is an actor, theatre professional, director and a teacher. One cannot forget his mesmerizing performance in yester year television serial Shaktimaan. He did the role of Dr Jaikaal.

Today he leads a busy life training youngsters in theatre and has great plans of making films on dogmatic religion. Lalit Parimoo is still waiting for his dream role. Over to the brilliant actor who tells about his passion…theatre and cinema.

Films interested me after 10th grade. I was not connected with any art form in anyway before that. I was pursuing studies in science and was very good at it. When I was in 11th and 12th I was cycling to school and started moving around. Those were the days when Mr Bachchan was popular. I started thinking of movies and got interested in acting, but had no clue how to go about it. My research started on what I should be doing. I decided to go to Delhi and pursue studies in art and start doing theatre. This was a big jolt to my family. I convinced them. Within three months I started acting with my college dramatic society. I made contacts and met some professional theatre people. I acted in several plays and my decision of becoming an actor had grown stronger. I got a job as actor on a monthly salary in a repertory company and worked for one and half years there. My tryst with radio and Doordarshan also began. Those were the days of Humlog and slowly I got an opportunity to star in one of the sponsored television shows. In 1992 I shifted base to Mumbai and satellite TV had made its presence. I acted in several serials for channels like Zee, Star and Sony. Meanwhile I formed my own theatre group called Natsamaj. It is formed for the youngsters and I train students interested in theatre, this is my way of giving back to the society. For the past 10 years I have been teaching and acting.

What prompted your decision to act in short films?

Short films became a buzz some years back. I was getting many offers but initially I was rejecting them for some reason or the other. Couple of years ago they were everywhere. I did ‘The Last Rehearsal’ because it was based on a theatre director’s life and also Ranjith Raghupathy is a good friend. I believed in what he was doing and I liked a couple of his films. Meanwhile I also wanted to do some short films.

What do you have to say to short filmmakers if you were to give a few words of encouragement?

Yes, always go ahead with your idea. So many writers and directors are making short films and the ideas are similar.  This is a tricky situation. Your film should be different, fresh, challenging and unique. Only then you should be making it. Because repetition will not be exciting or acceptable to the actors. Short film is like a small feature film and it is a miniature experience of making a film. It is like sharpening your skills. So one must go through it and sooner or later one must graduate to a bigger film. I too have made a short film.

What are the differentiating factors between taking up acting in Short films vs Feature films?

For an actor it is the same thing. But in theatre it different as the actor should be aware of his voice and body language. Acting in cinema, TV, web series are all the same. Maybe there could be differences due to the vision of the director. Here we work in shots. There are takes and retakes. Ultimately everything is made perfect with editing. Theatre is a different ball game altogether as you do it live and it is so very challenging. Short films, cinema and TV are more or less on the same level and style.

Short films will pick up in the future, though it is in its infant stage now. When the commercial aspects pickup they will have a proper future. It has been the case with cinema and TV. When some venture capitalists enter and make it commercial this area will seem lucrative. Online world can help a lot in this area. I think this should happen in future.

Life. It has been the greatest inspiration for me. I have been a long term student of Indian spirituality, Yog, Tantra and I have realised all great things are communicated through various forms of art. It is a vehicle to communicate not only what is happening in the society but also to shape it. Cinema will help the society at large.

Which is your favourite genre? Why do you have a fascination for this Genre?

Actually the kind of roles I want to do is not done by me yet. The real genre is the spiritual genre, which I am yet to do. Transformational change kind of roles is what I am looking for. A dark person getting into the path of good and being noble is what I desire to do. I haven’t got such roles. I nurture this passion because I believe in the idea of spirituality.

I am writing some projects and would like to direct it as well. Web series are interesting, but before venturing into making that I want to start with drama. I want to write on Abhinav Gupt, he is a scholar, saint and contributed immensely to tantric art. Somewhere I think that I am like him. His ideas can be communicated to society through plays. We should revive Indian cinema in the sense of dogmatic religion. If the right opportunity comes I will do it.

Due to the Pandemic I am conducting classes on theatre. Few scenes of my play Tuglaq is also being showcased online.  I am also acting in a web series Scam 92, which will release on Sony Liv next month. On DD Kisaan I have Paro Ek Prem Kahani. This is on air already.

The Last Rehearsal is now playing on FILLUM App