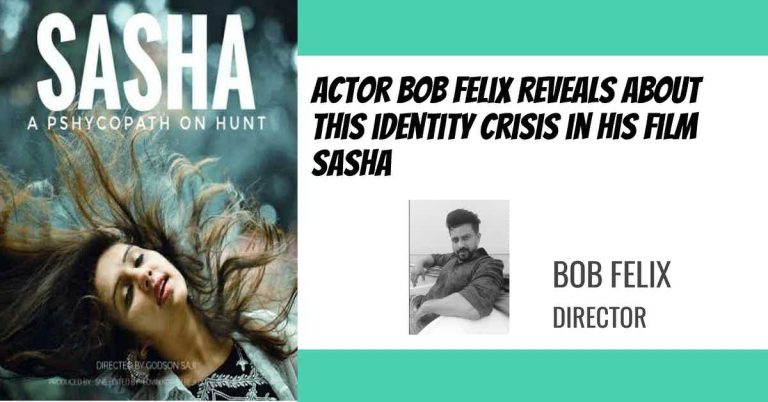 He turns violent when his identity is questioned…but why?

That intense look on his face cannot be missed in Sasha. The cruelty that lay behind this serene face is one of the highlights of Bob Felix starrer Sasha. “There is sequel in store and you just have to wait and see what the character David Rosario is upto,” says Bob. Talk to him and he is so different from what he portrayed on screen. The actor tells us about his journey in films and future plans…

Sasha is a different kind of thriller, tell us about this film?

This is a psychopath thriller. We thought of making a film on psychopath who finds comfort in another’s identity. There is a sequel to this film which will answer a lot of questions. Why did David Rosario become a psychopath? We will also get to see his avatar as Sasha. I must say it is very interesting.

How did films happen to you?

In 2002 I was a model and was working in Bangalore with Prasad Bidappa. I have modeled for several brands. I acted in Malayalam movies and some Kannada films followed. Then movie industry did not seem alluring so I moved into the fitness industry. My passion for movies is still alive and I am now doing short films.

Was working in Sasha challenging?

The entire movie was very challenging. Playing this role itself was such. The role is of a psychopath and to be that was not easy. Shooting was really fun. It rained that day.

I haven’t seen anyone like this in my life. The director had good clarity of what he wanted and I just followed his lead.

What about the other actors in your team, how was it working with them?

It was a great experience. We all were comfortable with each other. The girl who played Sasha is well versed in acting.

What are the cherished memories involved with Sasha?

The entire shooting itself was unforgettable and so nice. It was two day shoot. I don’t remember when we had food that day. Probably we did not eat at all. I think I had a proper meal after two days probably.

Feature films, short films or theatre plays I would just love to be part of the industry. I have been selected for the Auroville Theatre group. It is my passion to act. For now I am part of a Bollywood film. I cannot divulge the details. Also there are some Kannada films as well. I am waiting for things to settle down. Before the lockdown everything was going smooth.

Are you influenced by any director or actor?

Many of them have influenced me. Director Bala and Vetrimaaran. I would love to be a part of their films. Actors probably no. I have my own way of acting. Subtle acting is more of my style.

This app is very interesting. You guys are involving the cast and crew while publishing the movie as well. I think this will be of great help to us.