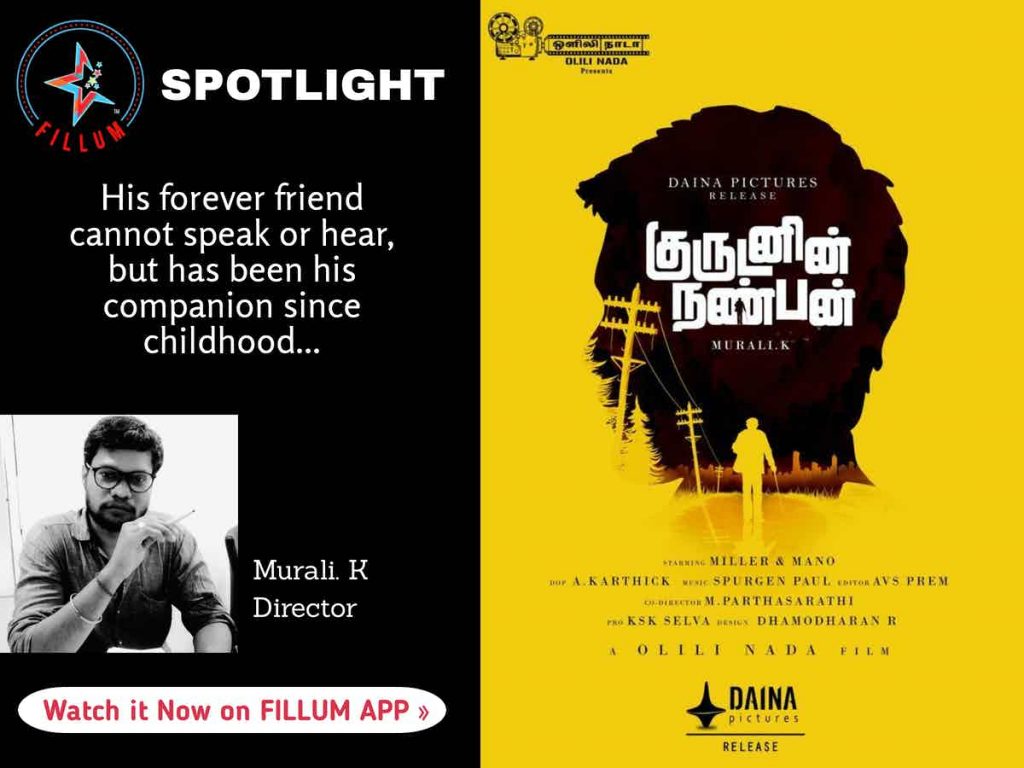 A chit chat with Murali K – Director of Kurudanin Nanban

Director Murali is of the opinion that anything that has been of help to us in some point in our life should be respected. The road travelled should not be forgotten, he says. His film Kurudanin Nanban ascertains on this fact. The director talks to us about his film and his passion for writing.

A chit chat with Murali K

Kurudanin Nanban is touching. How did you arrive at this story?

I write a lot of stories. Four years ago I picked this story from my collection of stories and decided to make a film on it. So that is how Kurudanin Nanban came into being. This was on my mind for a long time, but due to lack of time and finance I could not proceed further. Also when I saw blind people I was inspired and took up this film.

Actually this is not my first film. I have worked as an AD earlier. Apart from Kurudanin Nanban I have done three other short films. I studied BE Civil Engineering because it was the in thing those days. Seriously I was not interested in it. I had no idea about films. Slowly I started writing stories and script writing interested me. Later I developed interest in movie making.

I believe that anything in your life, which has been of use to you at some point should be treated with respect. Even if it is a lifeless object it might have served you at some point when you needed it desperately. This should not be forgotten. This is what I am trying to convey.

What roadblocks did you face, when you made Kurudanin Nanban?

Finance for this film has been a huge deterrent. Thankfully this issue was solved by my team. My friends have been a big source of strength to pull off this film. The cameraman and editor did not charge anything for this film.

We had a proper plan in place. We did not compromise on anything for this film. Even to shoot a single shot, we took an entire day. Proper detailing has gone into this film.

There is no single inspiration that I can point out to. We see these people in our everyday life. My film is not my imagination, this one is very close to reality.

My team consisted of six members.  Karthick A. was our cameraman and we worked together in Iruttu. AVS Prem is the editor of this film.  M Parthasarathy my co-director, was my huge support, he was with me all throughout. I would also like to express my sincere thanks to director VZ Dhorai for believing in me. Suresh Nallusamy, founder of Diana Pictures for being there always and helping us out. Miller played the blind man’s role and the doctor’s role was played by Mano.

Kurudanin Nanban’s music makes a huge impact. Tell us more about it?

Music is by Spurgen Paul. I had briefed him about the kind of music that I was looking for and he gave me exactly that.

Making this film itself is a beautiful memory. Everything associated with this film is something I will never forget.

I am penning some interesting stories. Once it is ready I will start looking for producers.

I do not have any such influences. To be frank I do not watch many films. Writing is my passion. So I refrain from watching other’s films and getting influenced by them.

I do not have a name in particular. But surely I will be interested in remakes.